Would You Like Fryes With That?: A Psychological Analysis of Fraud Victims

What started as an over-the-top music festival in the Bahamas ended up as a social media joke. The Frye Festival, which was supposed to take place in late April, was canceled - after guests had already started arriving:


On social media, where Fyre Festival had been sold as a selfie-taker’s paradise, accounts showed none of the aspirational A-lister excesses, with only sad sandwiches and free alcohol to placate the restless crowds. General disappointment soon turned to near-panic as the festival was canceled and attendees attempted to flee back to the mainland of Florida.

“Not one thing that was promised on the website was delivered,” said Shivi Kumar, 33, who works in technology sales in New York, and came with a handful of friends expecting the deluxe “lodge” package for which they had paid $3,500: four king size beds and a chic living room lounge. Instead Ms. Kumar and her crew were directed to a tent encampment. Some tents had beds, but some were still unfurnished. Directed by a festival employee to “grab a tent,” attendees started running, she said. 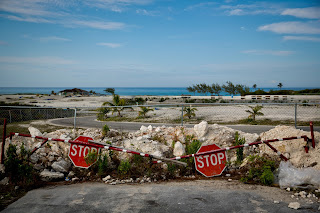 Now, they're under federal investigation for fraud. In hindsight, the whole thing is clearly a scam. Websites disappeared because designers weren't getting paid. Past customers of previous services complained that special offers never materialized. Not to mention hearing from disgruntled past employees and contractors. In fact, it's so clearly a scam, it's surprising anyone fell for it.

It's very easy for us to look at all of this information now, and come to the conclusion that it was a scam. The problem with hindsight is that it's always 20/20. The same cannot be said for foresight but that doesn't stop people from saying they would have known all along. This is called hindsight bias.

There's probably also some victim blaming going on here. How could these people not know any better? Had we been in the same situation, of course we would have known. We distance ourselves from the victims of this fraud, because it helps us feel more safe, more in control of our world. The same thing could never happen to use because we wouldn't let it.

Human beings are social creatures. We have to be. In order for our species to survive in a hostile environment, it was necessary for us to band together. We formed groups, which became tribes, which become whole societies. And in order to survive in these social structures, it was necessary for to have some trust in the people around us. You could argue that trust is an evolutionarily selected trait in humans. Let's face it, if you don't trust anyone else, it's really unlikely that you're going to reproduce. You have to at least trust one person to do that (at least, if you're reproducing on purpose).

So now we have a species pre-disposed toward trusting others. But we don't give our trust to just anyone - rather, to people we perceive as having certain traits. The more charismatic the leader, the more likely we are to trust them. And if everyone else in our social group trusts a certain person, we're more likely to trust that person too, at least externally.

Internally we may be more skeptical. If we look at the results of the Milgram study, we find that many people reported after the fact feeling very uncomfortable with what they were doing. They even had doubts as to whether they were doing the right thing. But they continued shocking the learner nonetheless. Why? Because somebody in the lab coat, somebody they perceived as having expertise, told them to. This person knows better than me, so I'm just going to keep doing what they say. It doesn't matter whether they actually have any expertise. It's the perception of expertise. And that is something charismatic leaders can do. They can convince you that they know more than they actually do, that they are an expert in something that you are not an expert in. Mc Farland had people believing that he was an expert in entertainment, technology, and rubbing elbows with celebrities. He had people convinced that he could help them to do the same thing.

I'm sure there are some people who didn't trust him. But they went along with him anyway, because there were people who did believe him, who believed that he could do exactly what he said he was going to do, despite instances in the past where he had simply wasted other people's money. But that's the nature of conformity. At the very least, if everyone else is doing it, that makes us more likely to question why we aren't doing it too. Maybe the rest of the group knows something that we don't. Maybe we're misreading the situation.

In the 1950s, Solomon Asch conducted what he said was a study on perception, that was actually a study of conformity.  Actors who pretended to be fellow participants publicly selected what was clearly the wrong answer, to see if the true participant would do the same; 32% of participants conformed with the wrong answer every time across multiple trials, and 75% conformed at least once.

Obviously, there are some other cognitive fallacies occurring here and in similar scams. The sunk cost fallacy, for instance, would explain why people held onto the idea of the festival, especially if they kept paying into it over time. It's the same principle that keeps people pumping money into slot machines or staying in bad relationships - if I keep this up, eventually it will be worth it, and I've put in too much time, money, and/or effort to walk away now. That's what happens when something has a variable schedule of reinforcement. We learn from variable schedules that if you just keep it up, the reward will eventually come.

Combine the sunk cost fallacy with a charismatic leader, the promise of rubbing elbows with people we admire, and other members of our social group going along with it, and it's not surprising at all that people fell for this scam. The problem is that people are going to keep falling for it. The people who were hurt in this particular scam will probably learn their lesson and stay far away from McFarland and his endeavors. But there will always be others will fall for it. And they're unlikely to learn anything from the negative experience of their peers - they'll blame the victims, they'll insist they would have known all along, and they'll distance themselves from those who have been hurt. They'll think of them as the outgroup - people who aren't like them in the ways that matter - and ascribe negative characteristics to them.