On Waterfowl, Learning, and Behavior

My new job is in a corporate plaza with a large pond. This pond has given me opportunities to observe many different kinds of waterfowl on a more regular basis, including swans, geese, ducks, and cormorants. During lunch yesterday, as I was eating outside, I watched a group of geese take off in flight, only to land about 10 feet away. Some of the geese continued to fly up and skid to a landing just a few feet away. I started wondering about what purpose this behavior might serve. Perhaps to stir up tasty fish?

But then it occurred to me that it might serve no purpose at all. After all, humans are not the only creatures to engage in meaningless behaviors, which is something I learned while taking a course on B.F. Skinner in college.

To back up a little bit, organisms have two broad ways of adapting to an environment. There's the long way, which occurs over multiple generations, through selective breeding: evolution. And then there's the short way, which occurs within the lifespan of an organism. We call this way learning. Because we can learn, we don't need to wait for evolution to catch up to certain things. For instance, we don't need to wait for humans to evolve, say, thicker skin or an extra layer of body fat to keep warm in cold locations; we've just learned how to do things to stay warm, like light a fire or create clothing.

Animals can also learn. In fact, some research suggests even single-celled organisms can learn - specifically, a very simple form of learning known as habituation. (Simple, but still quite impressive, considering these organisms don't possess a nervous system.) Creatures with more developed nervous systems will, of course, be able to learn more complex tasks. And those tasks can help them to function optimally in the environment.

Or, as I said, the behaviors could be meaningless. According to behaviorists, behavior is shaped through reinforcements and punishment, through a process of association. If I do something and then receive a reward right after, I'll be more likely to do that thing again in the future. But what if the behavior and the reward have nothing to do with each other, and the two just happened to coincide? That part doesn't really matter - what matters is whether I associate the behavior with the reward.

I play pub trivia with a group of friends. Last time I played trivia with them (which was a couple of weeks ago), I wore a new hat. We won. So let's say I wear that hat to trivia again, and we win. What if I keep wearing it and we keep winning? I might come to think of it as my lucky hat and insist I wear to every trivia event in the future. We call this a superstition, and while many cognitive psychologists explained it as an irrational belief formed through maladaptive thought, Skinner believed it was shaped through reinforcement. That is, he explained superstition in behaviorist terms instead of cognitive terms. And he set out to support his hypothesis with a genius study: he made pigeons superstitious.

The study started off as a typical animal learning study. Animals are first fed what's known as an ad lib diet - they can eat as much as they want whenever they want. Once their level of eating is determined from a period of ad lib eating, they are put on a diet, typically 75% of what they had been eating on the ad lib diet. So now they're hungry, meaning you can use food as an easy reward for training. Skinner conducted much of his animal training in boxes called operant conditioning chambers, or what is often called a "Skinner box." 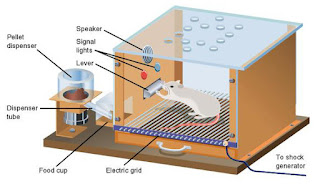 These boxes were usually designed so that food could be delivered in one of two ways: through a lever inside the box that you would train the animal to press, or from outside the box with a switch. Typically researchers use the switch to shape the animal to get to the lever and press it, but for this study, the only way food was delivered was through the external switch.

So now the fun begins. The hungry pigeon was in the box, wondering (as much as pigeons can) when it would be fed again.

It was doing random pigeon things when suddenly, food was delivered through the dispenser. After quickly eating the food, the pigeon eagerly waited for more. when no food came, the pigeon went back to doing random pigeon things when suddenly, more food. Over time, the pigeon began to associate whatever it was doing with the food arriving. Skinner trained pigeons to do all kinds of things in this study, including turning counterclockwise, head bobbing, or even holding completely still. The thing is, the food was being delivered at random intervals, but 75% of the pigeons in the study began repeating whatever behavior they happened to be doing when food arrived. Because the food was being delivered at intervals, more food would arrive eventually, so if the pigeon kept up the behavior long enough, food would arrive while the behavior was occurring or shortly after it finished.

Obviously, the only way for food to be delivered in the highly controlled operant chamber is through some kind of systematic force. So these superstitious behaviors had to be introduced through research. In nature, however, things just happen, and it would be easy for something good (or bad) to just happen at random. If an animal happened to be exhibiting some random behavior (like jumping up and flapping around) before a nice juicy meal appears, it might come to associate the behavior with the reward, even if the two aren't actually connected. And because some animals can learn by watching others, certain behaviors could get passed on that actually serve no purpose.