Recently, I started watching Stranger Things, a Netflix series that you've probably heard of, unless you live under a rock - but if you're able to get internet under that rock in order to read my blog, I'm not sure you have an excuse even then. The show takes place in 1980s small-town Indiana, and begins with the disappearance of Will Byers. But then things get, well, stranger. As a big fan of horror movies (for more evidence, look here), I'm of course loving the series. And probably the biggest reason for that is how the series pays homage to 1980s horror and sci-fi. Even though I'm only about halfway through the series, I wanted to sit down and gather my thoughts on all the different references and homages I've seen in the episodes I've watched so far. I'm going to try to keep this as spoiler-lite as possible.

The Title and the Town

First, I'd say the biggest inspiration for Stranger Things comes from the work of Stephen King. Though the show takes place in Indiana, on multiple occasions I've felt like I was in Castle Rock, the Maine town in and around which King sets many of his stories. In fact, the title of the show reminds me of a particular story by King: 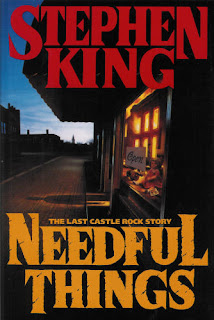 Then there's Eleven, a girl with psychokinetic abilities. I had her linked to one of King's characters, but when Will's friends (who discovered Eleven while trying to find Will) dress her up to sneak her into school, that clinched the link in my mind. 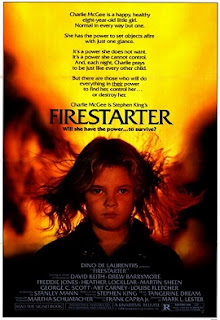 In fact, the storyline around Eleven draws a lot from Firestarter, including the government agency element and the nosebleeds Eleven experiences when using her powers.

The Disappearance of Will

Then there's the storyline around Will's disappearance, the creature who took him, and his mother's (Joyce, played brilliantly by Winona Ryder) efforts to find him and bring him home. This strongly reminds me of Poltergeist. In Poltergeist, Carol Anne is kidnapped from within her house and taken to another place that sits in a dimension parallel to our own; that is, she is essentially still in the house, just on a different plane. In Stranger Things, we are told by Eleven, and then shown later on, that Will is hiding in his own house. He's just over one dimension.

The entrance to the creature's realm, which appears to be in the government lab (though there might be other doors), is also similar to the door opened in the children's closet in Poltergeist:

Nancy and her Friends

At the same time as the story around the disappearance of Will, we have the story of Nancy, older sibling of one of Will's friends. She starts dating a guy from a different crowd, and while Nancy is distracted by him, best friend Barb is taken by the creature. Nancy definitely reminds me of Nancy Thompson from A Nightmare on Elm Street, a normal teenager who is pulled into a terrifying mystery after the brutal murder of her best friend.

Just like Elm Street Nancy, Stranger Things Nancy is present while her friend is being attacked but unable to help, though the friend continues to call out to her.

And just like Elm Street Nancy, Stranger Things Nancy is unable to get any adults to believe her story and has to figure out the mystery on her own.

Switching gears a little (that is, moving away from horror movies and on to different movies of the 80s), there's Will's group of friends, Mike, Dustin, and Lucas. Probably the biggest parallel is of the group of boys from the Goonies.

I mean, the leader of the group who pushes his friends to find Will, is named Mike (Mikey, anyone?). Barb and Nancy, before the whole disappearance and mystery, could also be Andy and Stef from the Goonies. Of course, I can also see similarities to Explorers, especially when you factor in the boys' love of science and meddling with things a government agency isn't happy about.


There's definitely more, but I'm going to stop there for now. More when I finish watching the series!
by Sara at 9:32 AM