When people find out I'm a psychologist, there are a few very predictable reactions, as predictable as the response I get when I tell people I'm originally from Kansas: 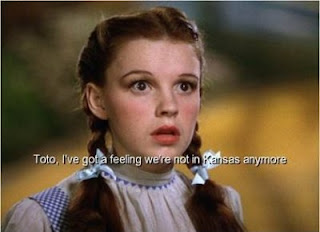 I'm of course asked if I'm analyzing them right now. I have many go-to responses for that one:

"I do research, so actually I'm analyzing your behavior."

"You think any self-respecting psychoanalyst would do that for free?"

But the next most common question is about dreams. I've had many people ask me if I can help them figure out the meaning of a strange dream they had. Even people who have known me for years sometimes ask me about dreams.

Dreams are pretty fascinating. It's like your own TV channel, except the shows all involve you walking around with no pants. (Or in my case, shoes - I definitely have the naked dream but probably more common is realizing I went all the way to work/school/somewhere random with no shoes.) There are certain dreams we all have. The naked dream is one example. But another common one was a recent subject of an article for the Washington Post:


We’ve signed up for a course that we never attend, or we forget we enrolled in it. When final-exam day approaches, we are panic-stricken because we never went to any of the lectures, never took notes and never did the readings or assignments.

The author, a journalism professor at the University of Maryland, did some digging to find out what psychologists had to say about the dream. I give her credit that the first place she looked was at the peer-reviewed literature. She was dismayed when she found nothing and expressed surprise that no psychologists had studied such a common dream. I'll be honest, I sat down and tried to figure out how I would study such a dream, and unfortunately, there don't seem to be a lot of objective ways to study any dream. You'd need to find people right after (or right before) they had the dream and try to measure various aspects of their lives to find any connections or explanations. But the problem with recruiting people right before is that 1) you don't know when or even if they'll have the dream and 2) you risk influencing their dreams by the simple act of studying them, perhaps causing people to have the school dream. In fact, just writing down your dreams have been shown to influence how you dream - I'm told that's the best way to get into lucid dreaming, where you are able to control the direction of a dream during the actual dream.

So with no peer reviewed literature to guide her, she asked various psychologists to offer their thoughts on the dream. Though many of the explanations crossed into the realm of psychoanalysis (see this blog post to find out what I really think about Freud and his ilk, a post that was also about dreams in which I briefly referenced the "going back to school" dream), there did seem to be a thread linking these explanations together that probably gets at the truth:


"I think those who have it tend to be professional and were successful students," says Judy Willis, a neurologist and teacher who lives in Santa Barbara, Calif., and who wrote about the dream in a 2009 Psychology Today blog post. "These are people who have demanded a high performance from themselves. The recurrence of the dream correlates with times of stress and pressure, when people feel they have a challenge to achieve."

Gemma Marangoni Ainslie, an Austin psychoanalyst, agrees. The final exam, she says, "is likely representative of an occasion when the dreamer feels he or she will be tested or measured, and the anxiety is about not measuring up. The dreamer's task in 'awake life' is to translate the final exam to a situation he or she is facing that stirs up concerns about potential failure."

But why school? Why don’t we dream about current pressures — grant proposals that are due, impending legal briefs or oral arguments, or newspaper deadlines?

"Emotional memories and impressions made during high-stress experiences are particularly strong, and are further strengthened each time they are recalled and become the place the brain goes when the emotion is evoked," Willis wrote in an email. "Since each new stress in the current day is 'new,' there is not a strong memory circuit that would hook to it in a dream. But there is that strong neural network of previous, similar 'achievement' stress. Since tests are the highest stressors. . . [it] makes sense as the 'go-to' memory when stressed about something equally high stakes in the 'now.'"

So the dream is really about fear of not measuring up, or of being measured and found wanting. We're concerned about failure. Though in the article, the psychoanalyst goes on to talk about manifest/latent content and how your brain is trying to shield yourself from the real truth, the neurologist's explanation is probably more accurate and certainly more supported. It's kind of the "neural-connectedness" theory of dreams. Information stored in your brain is connected through a neural network. Some connections - such the connection between dog and leash - are stronger than others - such as the connection between dog and duck-billed platypus.

When you sleep, your brain is consolidating memories, and building up the neural network. So if a stressful time in your current life reminds you of a stressful time in school, your resting brain will forge or strengthen that connection. I think, and I think Dr. Willis would agree, that dreams are just your brain making and testing connections, causing you to see elements of these memories and bits of information while you sleep. We see common themes and threads not because your subconscious brain is sending you coded messages, but because that's how neural connectedness works.

If you have had this dream, unfortunately you're probably going to continue having this dream, especially in times of stress. Dreams can be disconcerting but they're really just your brain testing out the wiring - and that's a good thing.
by Sara at 9:29 AM