The last couple of nights, I've gotten to engage in two "firsts":

The first first was seeing my favorite movie, The Big Lebowski, on the big screen. Though I've seen this movie so many times I can pretty much recite the whole script, I first discovered it 15 years or so ago, after it had been released on video. (In fact, I'm sure the first time I saw it was on VHS.) Thursday night, I went to a Big Lebowski movie screening/beer tapping party with a friend. So much fun! I wore a Maude Lebowski costume and won the costume contest (!) despite the fact that there was a very authentically dressed Dude there (who I personally think should have won). Here's a photo my husband took of me in costume right before I left for the party: 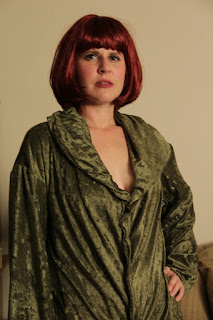 Then for the second first, I went to my first masquerade ball, the Devil's Ball to benefit the Auditorium Theater. Once again, so much fun! Despite feeling a little rough and having almost no appetite from over-indulging Thursday night, I spent much of the night dancing, partaking in the mask competition, and hanging out with friends. I even had my picture taken by the professional photographer after one of the Auditorium Theater board members complimented my dress. (Note to self - when going to this kind of party, always know off hand "who" you're wearing.) I mentioned to one of my friends that I haven't been coached on how to pose (which I really appreciated, because I'm not naturally photogenic) since my wedding day. Hopefully that photo will be up soon and I can share. For now, I give you a selfie I took right before walking over the ball: 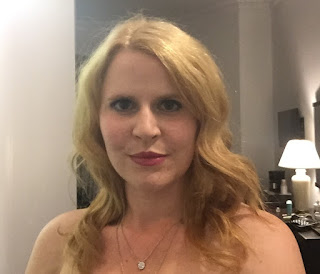