I recently spent a couple weeks visiting my family. While there, my mom found a lost dog with no tags or collar. She brought him home and we set out to find his owners. The vet found no microchip and didn't recognize him. Walking the neighborhood, I found no one who knew him and he didn't act like he recognized anything. And I had no bites on posts in lost dog Facebook groups. The vet suspected (as do I) that he was dumped. So that's how I got a dog. Meet Zeppelin! 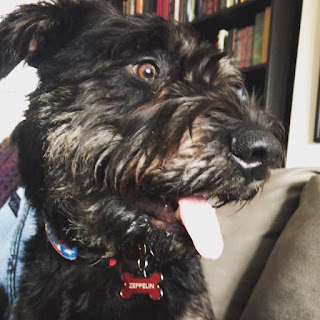 He's a terrier mix between 1 and 2 years old and a total sweetheart. He's my little shadow, following me around since I first met him. His name is thanks to a comment from my mom. She was describing the dog to someone, in an effort to find his owner, and mentioned he was a black dog. I remembered the Led Zeppelin song, Black Dog, and thought Zeppelin was a cute name. It was also one of the few names I tried out that he responded to in some way. He's also sometimes known as "Zep," "Zeppie," and "Z-Man," as well as "little shadow."

He likes anything that squeaks, especially soft toys. His favorite is his monkey that I've started calling Van Gogh, because Zep chewed its left ear off. 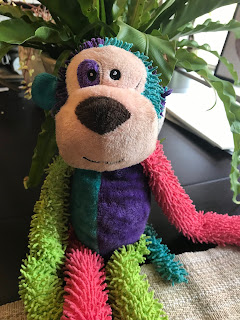 He also likes anything ball-shaped and his rope for tug-of-war. Food likes include chicken, cheese, cucumbers, and blueberries. He adores people and other dogs; the only dog he isn't sure about yet is the one he sees in mirrors and other reflective surfaces (though I think he's learning that dog is him). He prefers to sleep on a blanket on the floor but every night and morning, he hops up on my bed with me for belly rubs, and only jumps down when he feels sufficiently petted. He knows "sit," "drop," and "leave it," and we're working on more. I can't take credit for all that, because he already knew "sit" when we found him.

We also play a game where I put his toys away in his box while he's sleeping, and he immediately wakes up and drags all of them out onto the floor in a span of about 30 seconds. 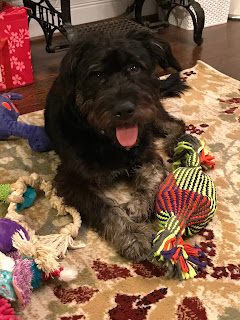 He loves to be sung to, and while he likes his namesake song, he also really likes music by female artists. He seems to especially like Taylor Swift.