Some Music for Your Holidays

Hey everyone,
One thing I've been doing during the pandemic is making music on my own. For our holiday season, I dropped my very first album: Winter Delights. You can read about the album and download tracks here or stream me on Soundcloud. I'm working on more arrangements (and upgraded my audio recording equipment) so I'm hoping to drop a full album early in the New Year!
And to give you a little extra something, here's a selection of performances from my choir's annual cabaret benefit, Apollo After Hours:
by Sara at 11:11 AM No comments:

A Follow-Up on Yesterday's Sexist Nonsense

Unsurprisingly, I'm not the only one who found Joseph Epstein's op-ed enraging. I give you this delicious takedown from Amanda Kohlhofer.

A privileged white man with no post-grad education telling a woman with a doctorate not to use her credentials. How very original of you, kiddo.

To that end, let’s list Dr. Biden’s accomplishments: She accomplished all of this over the span of 32 years, all while becoming a wife, raising children, teaching at many different levels, running a non-profit, and accompanying her husband through multiple political campaigns. (And, who wants to tell him that not only has she earned all of these degrees, but she has also, in fact, delivered a child?)

Just as I did, Kohlhofer suspects this piece would never have been written if Jill Biden were a man. And even though Epstein's blatant sexism is very obviously jealousy over a woman who is more educated, there are definitely people who casually drop the Dr. (or refuse to even recognize that the title could be Dr.) among women more than men.
In 2011, I earned a PhD in Social Psychology. I worked for many years as a health services researcher in the Department of Veterans Affairs, where I regularly worked with PhDs, MDs, and some of those crazy smart people with both. We all called each other by first name. (Except for colleagues who had just earned their doctorate - we called them Dr. at every opportunity until they got sick of it and begged us to go back to first name. Why? Because earning a doctorate is a freaking amazing achievement!) In college and grad school, we all called each other by first name. Academia or medicine is not what Kiddo Joe envisions of a bunch of people calling each other Dr. It was all pretty casual.
BUT there are times when that title should be used, such as when introducing a panel of presenters at a conference. And it was very telling how the moderators would often introduce the men as Dr. So-and-So and the women by their first name. It's telling the number of times people have asked me if my title is Mrs. or Ms. in some of these types of settings. It's telling that when I worked at a hospital, people would immediately say, "Oh, you must be a nurse." Why not a doctor? (And even more interesting is when I was married, people would ask my husband what he did for a living but would often ask me if I work.)
Women, either with or without higher degrees, constantly have to work harder to prove themselves. Gatekeeping is alive and well, not just in gamers and sports fans communities, testing women to see if they're legit, but in pretty much any field. I've interacted with fellow psychometrician and data scientists who I'm sure would prefer to call me "Kiddo" instead of Dr., or who waste valuable meeting time explaining core concepts "for Sara's benefit." I once had a psychometrician describe a concept and then urge me to read the chapter on this topic in the recent edition of the Institute of Credentialing Excellence Handbook. I was second author of that chapter.
And as Epstein demonstrates, gatekeeping doesn't even have to come from someone with the same background or credentials. It can be some dude with a BA writing in the WSJ.
Guys, women are exhausted with this nonsense. When interacting with a woman in a professional or academic environment, be aware of those little microaggressions, or the things you may be doing that make her have to work that much harder to be believed or respected. Introduce people with their titles. Assume women know about something unless they say otherwise. Stop wasting everyone's time and energy. And stop telling us to hang up our titles.
by Sara at 1:02 PM No comments:

I really wish this were satire, but Joseph Epstein's recent opinion piece in the Wall Street Journal is, sadly, a completely earnest bit of mansplaining and suspicion of the intellectual elite:

Madame First Lady—Mrs. Biden—Jill—kiddo: a bit of advice on what may seem like a small but I think is a not unimportant matter. Any chance you might drop the “Dr.” before your name? “Dr. Jill Biden ” sounds and feels fraudulent, not to say a touch comic. Your degree is, I believe, an Ed.D., a doctor of education, earned at the University of Delaware through a dissertation with the unpromising title “Student Retention at the Community College Level: Meeting Students’ Needs.” A wise man once said that no one should call himself “Dr.” unless he has delivered a child. Think about it, Dr. Jill, and forthwith drop the doc.

Epstein goes on to explain that he holds no higher degrees, other than an honorary doctorate. He talks of the hilarity of people referring to him by the title Dr. Yes, it is hilarious, because honorary doctorates are merely a beefed up way of thanking someone for speaking at a university, not recognition following years of hard work to demonstrate that one has earned a title that allows that person to be considered an expert. You see, that's what doctor means - expert. An M.D. is an expert in medicine, a person with a PhD is an expert in the subject of that PhD, and so on. Epstein's honorary doctorate is really more like the prize in a box of cereal. Yeah, he had to do some work for it, but nowhere near on par with the work Dr. Jill Biden did for hers.

Epstein also laments that doctoral requirements have gotten lax in recent years, which is rich coming from someone who has never attempted to earn a doctorate.

Getting a doctorate was then an arduous proceeding: One had to pass examinations in two foreign languages, one of them Greek or Latin, defend one’s thesis, and take an oral examination on general knowledge in one’s field. At Columbia University of an earlier day, a secretary sat outside the room where these examinations were administered, a pitcher of water and a glass on her desk. The water and glass were there for the candidates who fainted.

Is he correct that the doctoral examination no longer looks like this? Yes. There is no exam in Greek or Latin, nor an oral exam of general knowledge. But that's because the structure of doctoral education has shifted. In the past, doctoral education was very self-directed, with candidates choosing a course of study and pursuing it mostly on his (or her - but let's be real, back in the day mostly his) own. Candidates might spend years lurking around dark, dusty libraries, looking for some groundbreaking thesis to pursue. At the end, it was necessary to show that time hadn't simply been spent trying to write the most off-the-wall contribution to general knowledge, but that the candidate had also learned enough about the field of study to recognize how their contribution fits.

Today? Anyone interested in pursuing a doctorate must complete a certain amount of coursework, some elective but much of it required to establish the requisite knowledge in the chosen field. After that, they must also complete candidacy exams, which may be oral, as Epstein describes above, or written, or some combination. The point is to ensure the candidate has the foundational knowledge necessary to become an expert in the field. Then - and only then - can the candidate propose a dissertation. Other than Greek and Latin, the requirements are much the same, and in some ways, more stringent.

Honestly, not only do I think Epstein's dismissal of Dr. Biden's doctorate is ridiculous coming from someone with a Cracker Jack Prize of a doctorate, but I also suspect that if Dr. Biden were a man, using the well-earned title of Dr. wouldn't be an issue.

Seriously, WSJ? It's these kinds of articles that make me question whether I should keep subscribing to you. It's 2020. Do better. 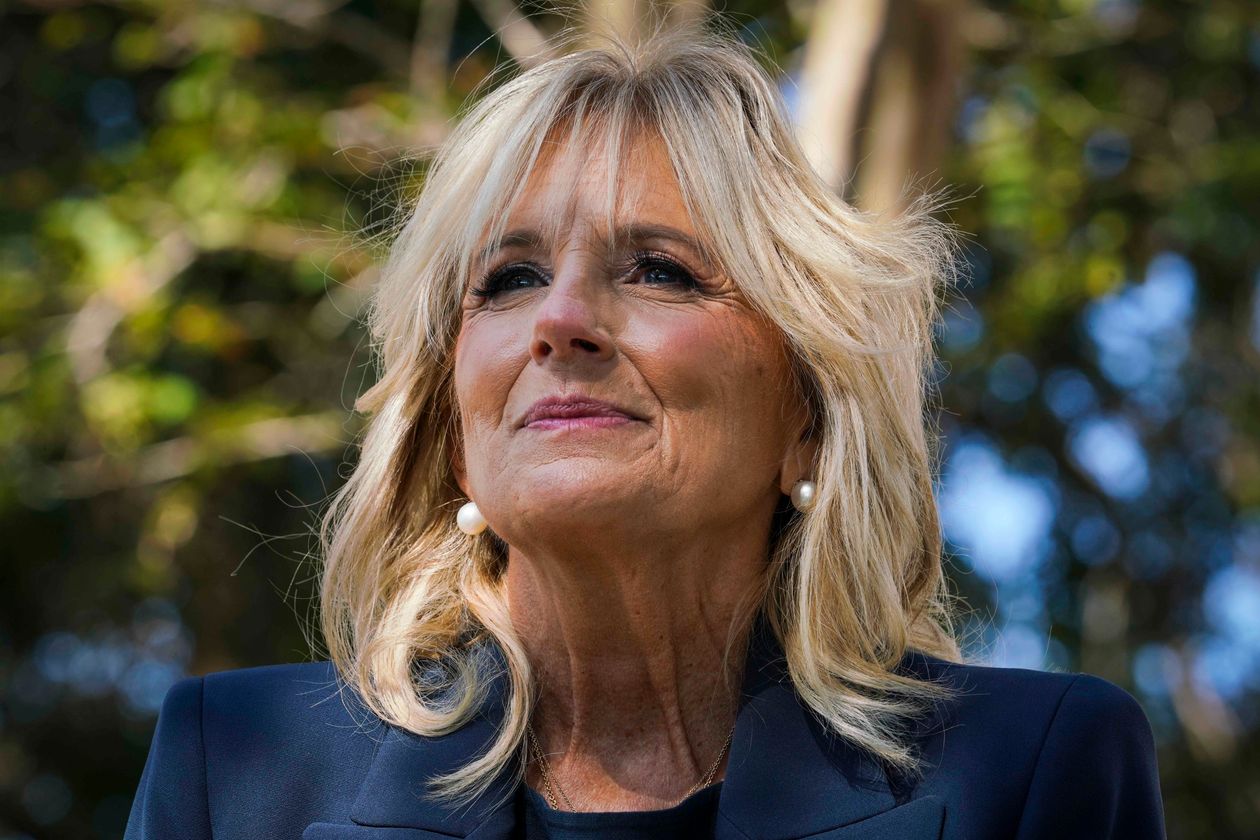 It's been a long time since I've updated! Though I've commented a bit on the pandemic on this blog, I've mostly stayed pretty quiet. Unfortunately, the COVID pandemic has hit home quite literally.

I'm currently in Kansas City with my family. My parents are older and have a variety of risk factors, so they've been staying in all the time. My brother, who lives with them, works in an elementary school, and though he's always been safe and careful, it appears he caught COVID shortly before Thanksgiving. Other than a bad cough, he reported feeling fine. Late last week, my dad had a COVID test done in advance of a procedure, and though he also felt fine, his test came back positive. Shortly after, my mom got a test that also came back positive. They're both experiencing more symptoms now, like shortness of breath and fatigue. My test done that same day came back negative, but yesterday, I started to feel some COVID symptoms myself, mostly fatigue (which could be as much due to stress as COVID).

We're all very lucky that our cases appear to be mild, and my parents' providers are checking in with them regularly to make sure they're recovering well. After this week, I'll probably take advantage of my excess vacation time and take time off from work to rest and recover. I'm in Kansas City for the rest of the year, and thanks to my parents' huge backyard, don't even have to leave to give Zep his much-needed outdoor time.

Stay safe and healthy, everyone!