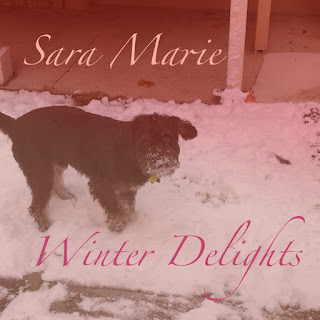 SaraMarie Holo · Winter Delights
Or download the whole album here
About Me:
Sara Marie has been singing as long as she can remember. She spent her childhood and adolescence on the stages of Turner High School and the Wyandotte Players community theatre. She attended Baker University on a combination of theatre, speech, and academic scholarships, and sang with University Singers and Concert Choir. She graduated magna cum laude in 2004 with a B.S. in Psychology and a concentration in Culture and Diversity. Later that year, she moved to Chicago to attend graduate school at Loyola University Chicago, completing her Masters in 2007 and PhD in 2011, both in Social Psychology, with an additional concentration in Women's Studies.
In 2005, she began singing with the Apollo Chorus of Chicago. Over the years, she has also sung with the Resurrection Choir, the Too Hot to Handel Chorus, church choirs at St. Benedict, St. Francis Xavier, and St. Thomas the Apostle, and as a hired soloist and cantor for Catholic masses, Lessons & Carols services, weddings, and funerals. Originally trained in musical theatre, Sara adores show tunes, but also loves branching out to sing arrangements of pop songs, choral-orchestral music, and jazz. In recent years, she has even tried her hand at vocal arranging. Because so many choirs and performances are on hold due to COVID, she decided to start making some music on her own, recording and editing herself. Here's a few of those tracks, and stay tuned for more (including more original arrangements) in the future!
Our cover model is Zeppelin, Sara's 2.5 year old Schnauzer mix. Although not featured on any of the tracks, he has had a tremendous influence on Sara's sense of hope, meaning, and joy in 2020. He came to Sara as a foundling in October 2019, and has barely left her side since! He love squeaky toys, cucumbers, belly rubs, Led Zeppelin, frapping in snow, endless games of fetch, being spoken to in German, and hogging the entire bed.
Album Notes:
I hope this album brings you some joy during the winter season. The first piece, Feeling Good, is an arrangement by Dorothy Horn for 5 women's voices. The song was originally written by Anthony Newley and Leslie Bricusse for the musical The Roar of the Greasepaint - the Smell of the Crowd, but this version draws heavily from Nina Simone's wonderful version of this song. (Honestly, I think you should drop whatever you're doing right now, and listen to some Nina Simone.) I sang this arrangement a few years ago with friends from the Apollo Chorus of Chicago (who absolutely nailed it), and had so much fun singing it, when I decided to record on my own this year, this was the first arrangement I thought of covering.
The second track is an arrangement I wrote of the Sara Bareilles song, Breathe Again, a beautiful, piano-driven rock track. I wrote this arrangement to be featured in Apollo After Hours, my choir's annual cabaret benefit, which we did virtually this year. I had such a great time writing and performing it, I wanted to share it once again!
The third track was also featured in Apollo After Hours, and sung with two of my dear friends: Aimee Scozzafave as the high voice, and Julie Muccillo on the middle part. Piano accompaniment was provided by brilliant pianist, dog-father, and assistant conductor for the Apollo Chorus of Chicago, Cody Michael Bradley. Songs of a Disney Princess is a medley of music from Cinderella, The Little Mermaid, Aladdin, Pocahontas, and Mulan, arranged by Mac Huff. Bringing together the performances of 4 people, recording in different places and conditions, was a challenge, but we are so proud of the finished product.
Track 4 is another Dorothy Horn arrangement, this time of May It Be from The Lord of the Rings: The Fellowship of the Ring, written by Enya and Roma Ryan. It's not every day one gets to sing in Elvish. Though the Elvish words speak of evil times (Darkness has come, darkness has fallen), the song overall is about hope and finding the light in the dark. As 2020 draws to end, I hope you too find lightness, beauty, and hope for what will come in 2021.
For the last track, I used a piano accompaniment from Sing2Music of Have Yourself a Merry Little Christmas from Meet Me in St. Louis. I found the lyrics especially meaningful, given that we've spent much of the year in quarantine. "Through the years we all will be together if the fates allow. Until then, we'll have to muddle through somehow." Someday soon, we'll all see each other in-person again. But in the meantime, have a wonderful holiday season and New Year!