I watched the Super Bowl tonight rooting hard for my Chiefs - I was even wearing a Mahomes jersey (full disclosure: it was supposed to be a Kelce jersey, since he's my favorite player, but due to a royal f-up by the post office, that jersey never arrived, so I was able to get a quick backup Mahomes, my second favorite player, jersey). I was disheartened that my Chiefs lost, but am happy for the Buccs to make an amazing comeback as a franchise (except you, Tom Brady, I still don't like you).

America the Beautiful by H.E.R., the National Anthem by Eric Church and Jazmine Sullivan, and the poem by Amanda Gorman were wonderful. Honoring our frontline workers and the message from our President and First Lady - beautiful. Plus the first female ref at the Super Bowl - all the feels.

The penalties were a bit ridiculous, and mostly being called on the Chiefs. It's ballsy to call pass interference on an uncatchable pass. I understand that many penalty calls in football are based on what we scientists call the counterfactual - what would have happened if a condition (such as, a defensive player pushing a receiver out of the way) was not present - but when a call equals free yards or another try at a down, they need to be used thoughtfully. The penalty calls felt very one-sided. Yes, the Buccs finally got their own "unsportsmanlike conduct" call as well as a much-needed "roughing the passer" (but it took 3 guys hitting Mahomes in much the same whiplash way that caused a concussion 2 games ago). They say homefield advantage doesn't exist in playoff games. I beg to differ.

I'm surprised at the hate I'm seeing about the Halftime Show by The Weeknd. I went into halftime knowing a couple songs by him, and finished it as a fan. We're used to these blow-out halftime shows with 3 big-name artists plus 10 high schools worth of marching bands and drill teams on the field, but in COVID-land, that's just not possible. Instead, we got an artist who was able to showcase choral and dancing talent while still respecting social distance and safety. The dancers wrapped in face bandages for "I Can't Feel My Face" was super clever - guys, those were face masks! (NOT JOCK STRAPS, as some have joked.) They were able to have dancers in close quarters wearing face masks in a way that made sense with the song. In fact, they looked so little like face masks that... see jock strap comment. I was super impressed!

In the second half, we saw a bit of the old Chiefs, but sadly not enough to score a single point. The Buccs' defensive line was just too good - I mean, they ran a blitz on every f***ing play, and our offensive line couldn't hold them back long enough to give Mahomes as much time in the pocket as he's used to. This is something to work on for next season. Mahomes is an amazing quarterback but he's used to hanging in the pocket long enough to survey the field, pick his receiver, and pass; let's work on decreasing the time he needs in the pocket. And let's work on an offensive line that can predict how the blitz is going to work and knock those guys down. Yeah, a team that blitzes on every defensive play is unusual, but as we saw tonight, IT HAPPENS! Practice defusing a blitz from every angle.

Also, WHY DIDN'T YOU SHOW US AN INSTANT REPLAY ON THE RANDOM FAN ON THE FIELD?! I wanted to see that again/closer up.

Overall, I'm sad the Chiefs lost and annoyed at the one-sided-ness/overeagerness of the penalties. I enjoyed the game, the commercials (ALL the celebs came out for those, including a Wayne's World call-back with Cardi B???!), and the performances. I'm happy for the Buccs and hopeful for the Chief's next season (I mean, winning Super Bowl last year plus being AFC Champs again this year is nothing to sneeze at). And okay, Tom Brady proved that a quarterback can still be good and (pretty much automatically, because we always honor quarterbacks and ignore the other positions - like how about TE Gronkowski?) be Super Bowl MVP at 43. You're on top, dude; how about you retire? 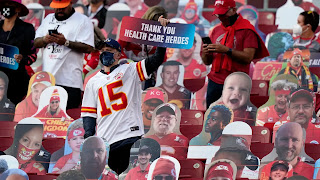