I'm currently reading Alexander Hamilton by Ron Chernow - the book on which the Broadway musical, Hamilton, is based. 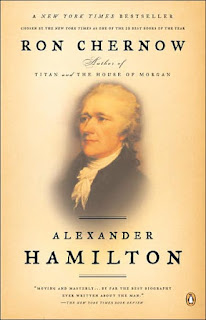 I'm currently about 250 pages in, so it doesn't look like I'll finish before the end of my vacation, but I've made a good dent. In the current section, which is about Hamilton's writing habits, particularly with regard to the Federalist Papers, I found this description of Hamilton's approach to writing from William Sullivan's Public Men of the Revolution:


One who knew his habits of study said of him that when he had a serious object to accomplish, his practice was to reflect on it previously. And when he had gone through this labor, he retired to sleep, without regard to the hour of the night, and having slept six or seven hours, he rose and having taken strong coffee, seated himself at his table, where he would remain six, seven, or eight hours. And the product of his rapid pen required little correction for the press.

What Hamilton was doing - and I'm certainly not downplaying his genius, or his Mozart-like ability to write without the need for revision - was taking advantage of the memory consolidation function of sleep. That is, during sleep, your brain builds neural connections and essentially transfers events and what you learned that day into long term memory. This is why one of the effects of sleep deprivation is memory issues. So Hamilton did the thinking (and some research) needed to gather his thoughts, then slept to allow them to coalesce and organize. Then he would wake up and write it all down. In fact, I just received a link to yet another study demonstrating the memory consolidation effects of sleep.

Of course, what Hamilton did was even more extraordinary when you consider that it was not yet known that sleep could do this - at least, not from scientific study. Psychology wasn't even considered a field yet; that would happen in 1870s Germany. That Hamilton fellow was pretty smart.
by Sara at 5:07 PM