The Oatmeal and the Backfire Effect

Stop what you're doing and check out this great cartoon from the Oatmeal, dealing the backfire effect, a psychological phenomenon where information that is contrary to your beliefs actually strengthens your beliefs. 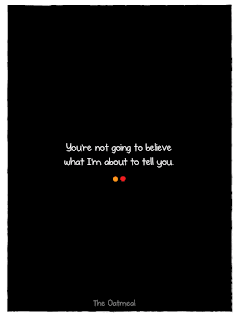 This concept is also sometimes called attitude polarization or belief polarization. Think of your attitude or belief as falling on a continuum, in terms of things like strength or importance - after all, most social psychologists do. Let's say you have an attitude that falls at the far right, close to the maximum. Information from the left might actually push you even farther right, up to the maximum (the poles).

If your attitude is a bit more wishy-washy (somewhere in the middle), it might not take much to move you to one side or the other. So backfire effects are strongest among people with strongly held attitudes or beliefs - generally the people who are more likely to act on those beliefs. We know that attitudes and behavior have a tenuous connection, but that connection is strongest when the attitude is specific and strong (a core belief).

On a side note: I wonder what it says about me that none of the "mind-blowing" facts presented in the cartoon ruffled my feathers. Either I'm really chill about hearing new information that might conflict with my beliefs or I'm feeling apathetic these days. (Yes.)
by Sara at 8:30 AM