Out of Touch, Out of Time

Hard to believe it's only been a week since FBI Director James Comey was fired. There are still debates about whether this firing was for the official reason given by the White House (poor handling of the Clinton email investigation) or to halt the investigation into the Trump administration's connections with Russia. There are reports that Trump asked Comey to cease his investigation into Michael Flynn's connections with Russia before the firing, as well as reports that Trump shared classified information with Russia. 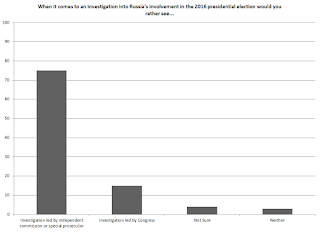 And before you shout "fake news!" and insinuate most respondents were Clinton supporters, the sample was pretty evenly split between Clinton and Trump votes; 37% voted for Trump and 40% voted for Clinton. The remainder voted for another candidate or did not vote in the election.

Some other golden nuggets from the survey: 57% had little to no confidence in Trump as president, 48% think the new health care legislation is a bad idea, 38% disapprove of Comey's firing, and 46% agree or strongly agree Trump fired Comey to slow down the investigation. And Trump's actions of late have increased many respondent's doubts about him as president: