What Do Americans Think About Science Protests

On April 22, 2017, Marches for Science occurred in Washington D.C. and other cities around the world (including Chicago!). Yesterday, the Pew Research Center published results of a recent survey, asking Americans what they thought about the marches and specifically, whether they thought it would help or hurt the cause:

As is the case so often these days, responses were divided along party lines:


61% of Democrats and Democratic-leaning independents believe the marches will increase public support for science, while only 22% of Republicans and those who lean Republican say the same. Instead, 60% of these Republican backers think the protests will make no difference, compared with just 32% of Democratic partisans who think that. 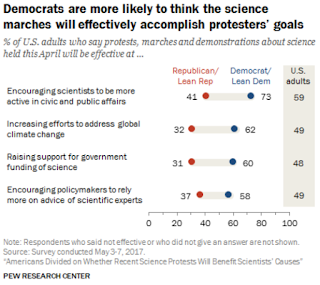 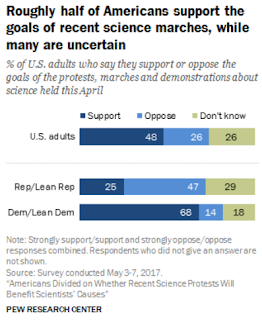 It's not too surprising how partisan this issue has become, considering that Trump and his ilk have politicized pretty much every issue. By making things that should be objective into partisan issues, you can ensure that your supporters will fall in line with your way of thinking, even if it doesn't make a whole lot of sense. People on the other side of the political spectrum are simply seen as being partisan themselves (and let's face it, with some issues, they are), which makes it much easier to discount their arguments.


I tire so of hearing people say
Let things take their course. Tomorrow is another day.
I do not need my freedom when I'm dead
I cannot live on tomorrow's bread.
-Langston Hughes