You may recall from my reading analysis post that Stephen King was one of the most popular authors among by Goodreads friends. Sleeping Beauties, which came out last year, is the newest book from Stephen King, which he cowrote with his son, Owen King. The book was well-reviewed, even winning the Goodreads award for best horror. I knew I was going to read it eventually, but I was concerned about how long it would take me to work my way through those 700 pages. Surprisingly, not long at all - I finished the book in about a week. 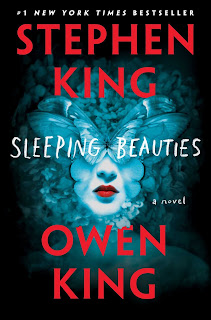 At the beginning of the book is a long list of characters, identifying who they are in relation to other characters. I started reading this but wanted to get started on the actual story, so I skipped on to the book. The character list really wasn't necessary at first, because at the beginning, characters are really in one of two places: a woman's prison and the nearby town of Dooling (a fictional town in the Appalachian region). Only one main character starts outside of Dooling, and the rest were all tied to their locations/roles, so it was quite easy to remember who characters were. As the events of the story moved along, and a new location was introduced, with people from the prison and Dooling, it was nice to have that list to refer back to as a reminder.

The story begins when a stranger comes to town - a half-naked woman who calls herself Eve - who proceeds to go Hulk on a couple of meth dealers, beating them to death. A third man gets away and Eve leaves the woman living with the meth dealers, Tiffany, unharmed. Eve is picked up by Lila, the town sheriff, and taken to the woman's prison, for temporary housing and so she can be evaluated by Lila's husband, Clint, a psychiatrist. In the meantime, the police arrive to take Tiffany's statement about what happened, and are shocked when Tiffany falls asleep and is suddenly wrapped in a white, cottony substance - a cocoon, much like the ones created by moths (which appear throughout the book in many symbolic ways).

Women around the world go to sleep and become wrapped in cocoons, falling to what is dubbed "Aurora syndrome" after the name given to Sleeping Beauty in the Disney movie. If anyone awakens a sleeping woman, she goes into a murderous rage, before falling back asleep. Lila and the other women of Dooling struggle to stay awake, but most fail - and are almost instantly wrapped in a cocoon. In the meantime, Eve, who seems to know something about what is going on with the cocooned women, is able to sleep and awake as normal. Dooling is at the center of whatever is causing women to sleep and cocoon all over the world. This is confirmed after the women who have fallen asleep awaken in another place - but we quickly see, it's only the women of Dooling who appear in this other place. The story then focuses on the mystery of Aurora and Eve.

As I said, the book is a surprisingly quick read for 700 pages. Though it is a detailed story, part of the reason for the length is the multiple subplots and characters. The idea for the story is Owen's, but the number of characters and subplots is pure Stephen. (This is why Stephen King books are often adapted into mini-series instead of movies, to retain as much of the story as possible. I could definitely foresee Sleeping Beauties adapted as a mini-series for Netflix.)

I very much enjoyed this book and would highly recommend it. Though Stephen King is well-known for being a horror writer, I personally wouldn't classify this book as horror - it's fantasy mystery/speculative fiction, with some elements of suspense (and a healthy dose of feminism). Nothing is really that scary, or even unsettling in the way some light horror can be. So if you're not a fan of horror, don't let the horror label scare you away from Sleeping Beauties. The book will make you think and laugh, but I highly doubt it will scare you, unless you have a phobia of moths. And if you are a fan of horror, you may not find it here, but what you will find is a very satisfying story.
by Sara at 10:05 AM