So Does that Make it Nine Floyds?

Three Floyds Brewery in Munster, Indiana has plans to triple their current space, with a new glass-walled building that would feature a larger brewpub, outdoor seating, more parking, and of course, more space for brewing:


The plans — which look more like a vision from the tech industry than craft brewing — were posted last week on the town of Munster’s website. Town officials have been hammering out details of the expansion with Three Floyds since September.

Munster Town Manager Dustin Anderson said he expects formal approval by March. The new brewery would likely be completed in 2019 or 2020.

Three Floyds bought multiple lots around its brewery in 2014 to expand brewing production and build a distillery. The new plans calls for Three Floyds to continue building outward from its existing operation, including construction on an undeveloped lot north of the distillery and a lot south of the brewery that formerly housed another business.

“We’re thrilled,” Anderson said. “Three Floyds is a great neighbor and asset for the community, and we’re glad they’re choosing to expand in Munster.” 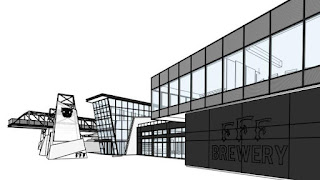 I'm a big fan of Three Floyds, and have visited their brewpub a couple of times, which can fill up quickly. I can't wait to visit their shiny new facility!
by Sara at 11:40 AM