Last week, I wrote a blog post in which I analyzed my reading habits from 2017. I had so much fun pulling that data together and playing with it that I took things a step farther: I decided to look at my friends' 2017 reading habits as well.

I included all friends on Goodreads who logged at least one book as read in 2017. This gives me data on how many books (and which ones) were read by friends who use Goodreads to log their reading activity. I did not include friends who logged 0 books, because there’s no way of knowing if they 1) did not read at all in 2017 or 2) did not log books they read or logged books without adding a read date. This resulted in a dataset of 40 friends and a total of 692 books.

Other things I should note about the data:
Findings 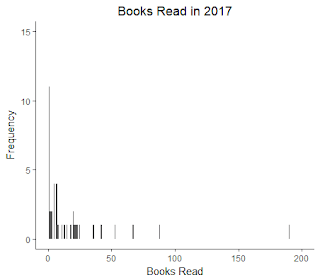 The barplot is easier to read without this outlier:

For the most part, each reader was unique in the books he or she read: 94.5% (or 654) books were unique to a single reader, and about 4.1% (29 books) were read by 2 readers in the dataset. That left 9 books (1.3%) read by between 3 and 6 people, which I display in the graphic above. As I mentioned in that previous reading post, the most popular book was The Handmaid’s Tale, read by 6 people. The remaining books were A Man Called Ove, 4 people, and each of the following with 3 people: Dark Matter by Blake Crouch, Harry Potter and the Half-Blood Prince and Harry Potter and the Deathly Hollows both by J.K. Rowling, Into the Water by Paula Hawkins (which won Best Mystery & Thriller in the Goodreads Awards), Thirteen Reasons Why by Jay Asher, Turtles All the Way Down by John Green (which ranked #20 in Amazon's Top 100 list), and Wonder by J.C. Palacio.

True, my dataset probably won’t generalize beyond my friend group, but the popular books match up really well with Amazon’s This Year in Books analysis, which showed The Handmaid’s Tale was the most read fiction book.

The second most popular book on Amazon’s list, It, was read by 2 people in my dataset. Oh, and speaking of Stephen King, he was the most popular author in my data, contributing 13 books read by 8 readers. 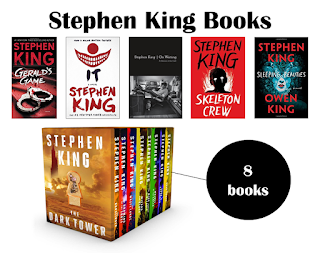 The second most popular was Neil Gaiman, with 11 books across 5 readers. 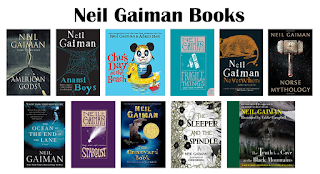 And in fact, going back to my previously noted flaw, that I only analyzed first author, both of these popular authors had 1 book with a coauthor. Sleeping Beauties (winner of Best Horror in Goodread's awards), which is included in the Stephen King's graphic above (because he's first author) wrote that book with his son, Owen. And Neil Gaiman should have 1 additional book in his graphic: Good Omens: The Nice and Accurate Prophecies of Agnes Nutter, Witch. That book was cowritten with Terry Pratchett, who was first author and thus the only one who got "credit" for the book in my dataset. The addition of that book would increase Neil's contribution to 12 books, but would have no effect on number of unique readers, or his rank in terms of popularity.

The cool thing about those particular results? They came from individual readers. One person read those 22 Erin Hunter books, a different person read the 19 Victoria Thompson books, and a third person read the 14 Lee Child books. (In total, these 3 friends read 345, or 49.9%, of the books included in the dataset.) In fact, it was cool to see the fandom of my different Goodreads friends.