Statistics Sunday: On Birthdays, and One-Tailed and Two-Tailed Tests

It's my birthday today! I spent last night celebrating with friends. Today I'll be relaxing, reading, and writing, plus dinner at one of my favorite restaurants. Obviously, birthdays have some important implications: 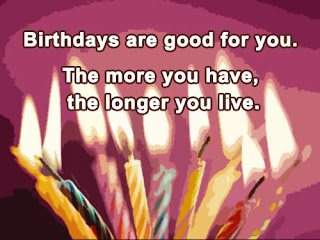 For today's Statistics Sunday post, I wanted to revisit a topic I touched on briefly in my post on null and alternative hypotheses, using our silly hypothesis above as an example. We could update this hypothesis to be something about having more birthday parties, but obviously, there would still be a third variable issue here.

Those statistical hypotheses, among other things, allow you to derive your critical value - the cut-off between significant and non-significant. This is based on your selected alpha. When you're testing for a difference, one that could go in either direction, you divide your alpha into 2. In this case, your cut-off in your normal distribution would be in both tails.

But if I wanted to test the hypothesis above, that people who have had more birthdays live longer, it doesn't make sense to test for a difference. It makes sense to test in a certain direction: people who have had more birthday parties live longer. In this case, you can maximize the chance that you'll find a significant effect by putting all of your alpha in one tail.

If you did a really simple study, where you recruited people who had never had a birthday party and people who celebrated their birthdays, then tracked how long they lived, you would set your cut-off value so that all of your alpha is in the upper tail of your distribution - and you would only reject if your birthday partiers were significantly older at their time of death than your birthday non-partiers. Your cut-off value will be lower as a result, making it easier to reject the null hypothesis, but you also only get to reject the null hypothesis if the difference is in the expected direction (that is, the partiers were significantly older rather than significantly younger).

This concept is taught in statistics courses, and students are often tested on whether they understand one-tailed versus two-tailed tests. The thing is, I rarely see this done in journal articles. Not every statistical analysis allows for one- versus two-tailed tests, and it wouldn't make sense to do this for more complex analyses. But it's surprising that when people are doing simple t-tests, which I do see in journal articles, there doesn't seem to be any consideration of directionality of hypotheses.

What do you think? Have you encountered one- and two-tailed tests outside of statistics courses?
by Sara at 10:53 AM