The Reality of "Separate Issues"

Healthcare was a major issue in this election. And Gallup data from back in December suggests that 40% of Americans are dissatisfied with the care they receive. Many people who voted for Trump were likely motivated by that and his promise to repeal the Affordable Care Act (probably one of the most misunderstood pieces of legislation in recent history).

Trump also made many promises with regard to immigration, especially of people from predominantly Muslim countries. Many people probably thought of these two promises as separate issues.


Like many Western nations, the U.S. has come to rely heavily on medical graduates who trained internationally, although these graduates face significant barriers to being allowed to practice in the U.S., including burdensome licensing processes and duplicative training. Still, foreign medical graduates comprise more than one-fifth of all practicing physicians in the U.S. Where a doctor trained does not necessarily tell us where that doctor is originally from — and thus whether he or she may be subject to the immigration order — but it serves as a useful proxy, if we assume that most doctors train in the country where they are born.

Our research finds that foreign-trained doctors play an even larger role than their share of the physician workforce would suggest because of the areas and specialties in which they often practice: rural, underserved regions and specialties facing a large shortage of practitioners. And of the foreign-trained doctors in our sample, about 5 percent — approximately 8,000 people and 1 percent of all doctors — completed medical school in the countries that are affected by the ban. 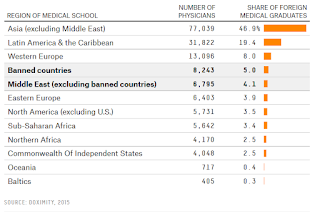 Many of the issues affecting healthcare today can be directly attributable to the physician shortage. This is part of the reason for the waitlists uncovered in VA hospitals and medical centers. (Not to excuse those waitlists, but at least to explain them and identify a potential solution - VA needs more doctors, and Trump's hiring freeze for federal agencies is doing the opposite of what VA needs right now.)

And new movements in the area of medicine and portion of the Affordable Care Act are also strongly affected by this shortage. In fact, other medical professionals, such as physician's assistants and nurse practitioners, are being given increased responsibilities and privileges, to help counteract this shortage - PAs and NPs can do many of the things physicians can, and I'm hearing more and more about people whose primary care provider is one of these two types of professionals.

Yes, we're facing a physician shortage in this country, especially for primary care providers. Medical school is expensive, and add to that years of post-med school training that also has a cost of lost salary. For the people who make it through all of that, they're likely to be drawn to certain specialties, which promise much larger salaries than primary care. You can call it greediness, but I can't blame people for wanting to decrease how long it takes to get out from under the crushing debt of attending medical school. This leaves a lot of empty primary care offices that could be (and are being) filled by physicians who want to come to the US.

The physician shortage is absolutely connected to the issue of immigration. The problem is that, as with his hiring freeze, Trump's order is doing the exact opposite of what this country needs.
by Sara at 2:12 PM