Human beings have been enjoying booze for 9,000 years, according to an article in this month's National Geographic. Though previously, alcoholic beverages were considered consumables, the author pulls together evidence that argues these beverages have a special place in our culture, being connected to important traditions and even inspiring us and pushing us forward as a species:


All over the world, in fact, evidence for alcohol production from all kinds of crops is showing up, dating to near the dawn of civilization. University of Pennsylvania biomolecular archaeologist Patrick McGovern believes that’s not an accident. From the rituals of the Stone Age on, he argues, the mind-altering properties of booze have fired our creativity and fostered the development of language, the arts, and religion. Look closely at great transitions in human history, from the origin of farming to the origin of writing, and you’ll find a possible link to alcohol. “There’s good evidence from all over the world that alcoholic beverages are important to human culture,” McGovern says. “Thirty years ago that fact wasn’t as recognized as it is now.” Drinking is such an integral part of our humanity, according to McGovern, that he only half jokingly suggests our species be called Homo imbibens.

The active ingredient common to all alcoholic beverages is made by yeasts: microscopic, single-celled organisms that eat sugar and excrete carbon dioxide and ethanol, the only potable alcohol. That’s a form of fermentation. Most modern makers of beer, wine, or sake use cultivated varieties of a single yeast genus called Saccharomyces (the most common is S. cerevisiae, from the Latin word for “beer,” cerevisia). But yeasts are diverse and ubiquitous, and they’ve likely been fermenting ripe wild fruit for about 120 million years, ever since the first fruits appeared on Earth.

From our modern point of view, ethanol has one very compelling property: It makes us feel good. Ethanol helps release serotonin, dopamine, and endorphins in the brain, chemicals that make us happy and less anxious.

To our fruit-eating primate ancestors swinging through the trees, however, the ethanol in rotting fruit would have had three other appealing characteristics. First, it has a strong, distinctive smell that makes the fruit easy to locate. Second, it’s easier to digest, allowing animals to get more of a commodity that was precious back then: calories. Third, its antiseptic qualities repel microbes that might sicken a primate. Millions of years ago one of them developed a taste for fruit that had fallen from the tree. “Our ape ancestors started eating fermented fruits on the forest floor, and that made all the difference,” says Nathaniel Dominy, a biological anthropologist at Dartmouth College. “We’re preadapted for consuming alcohol.”

Robert Dudley, the University of California, Berkeley physiologist who first suggested the idea, calls it the “drunken monkey” hypothesis.

Drunken Monkey would be a great name for a brewery. Just sayin'.

The article also features a great infographic about alcohol throughout history: 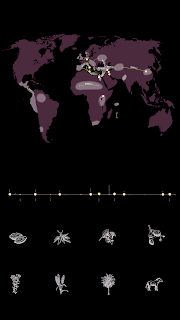