Be the Very Model of a Modern Academy Awards Show

FiveThirtyEight seems to be having a lot of fun modeling and predicting what's going to happen with this year's Academy Awards. And according to their data, the most contested (and unclear) is the race for Best Actor:


The vaunted Academy of Motion Picture Arts and Sciences has begun voting on who wins what at the Oscars, and if one race is still slightly clouded in mystery, it’s the one for best actor. This contest — among Casey Affleck (“Manchester by the Sea”), Denzel Washington (“Fences”), Ryan Gosling (“La La Land”), Andrew Garfield (“Hacksaw Ridge”) and Viggo Mortensen (“Captain Fantastic”) — has been an odd one to watch.

Now we get to the real competition: Washington, who plays the lead in a film he directed, and Affleck, the gruff Bostonian who utterly transformed in the film “Manchester by the Sea” to play a dour New Englander. Washington received the top male acting honor from the Screen Actors Guild, and Affleck won just about everything else.

In 18 of the past 22 years, the actor who won at SAG went on to win the Oscar. The best actor SAG award is one of the most historically predictive shows in our database of 25 years of critic and guild prizes.

So Denzel won the most predictive award, but Affleck's cumulative wins give him better odds. The other issue, though, is whether people will vote for Affleck given recent sexual harassment allegations:


This contest is such a wild card partly because we have no idea whether Affleck’s PR counteroffensive is convincing academy members to consider his performance over allegations that he sexually harassed women who worked on his 2010 film “I’m Still Here.”

Here's where the odds stand now: 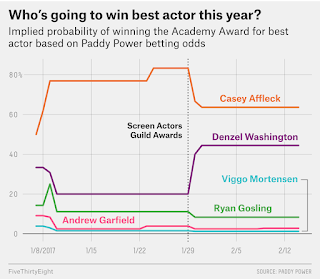 Not to politicize this, but does the whole "race between candidates where one is alleged to have done some awful things to women and the other is unbelievably overqualified to win" seem familiar? Just me?
by Sara at 10:12 AM