The current presidential administration has revitalized many things: the nature of political satire, interest in policy and current events, existential terror so profound you're not sure whether to laugh or cry... In fact, White House press secretary Sean Spicer is pulling in better ratings than some daytime soap operas:


Mr. Spicer’s briefings, carried live by the major cable news networks, are pulling in an average of 4.3 million viewers, according to data from Nielsen. Audiences across Fox News, MSNBC and CNN grow by an average of 10 percent when Mr. Spicer comes onscreen to discuss the latest news on President Trump, statistics show.

The soap opera at the White House is outscoring actual soaps like “General Hospital” and “The Bold and the Beautiful,” which typically air around the same time. Mr. Spicer’s ratings are on par with prime-time entertainment like “MasterChef Junior” on Fox and the ABC sitcom “Dr. Ken,” which draw around four million viewers each.

It's also rekindled my activity on Twitter - today, I discovered this gem:

DING, DING, DING! Here it is; THIS is what we've been looking for. pic.twitter.com/9tP5BIDJxh
— Sherry Frost (@frostnhstaterep) February 11, 2017

BTW, not sure about you, dear reader, but I've been having more nightmares lately. I wonder why... 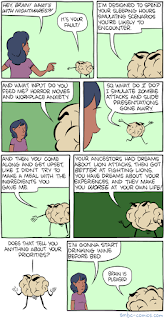