Finding the Most Depressing Radiohead Song with R

What's the most depressing Radiohead song? According to RCharlie and his analysis of Spotify and lexical data, it's "True Love Waits":


Spotify has already done some research on the “saddest” songs; the streaming service keeps track of a stat called valence, a psychological term that describes things that make people feel happy or sad. RCharlie used the company’s Web API to pull that data for all of Radiohead’s songs, determining that “We Suck Young Blood” off of Hail To The Thief and “True Love Waits” from Moon Shaped Pool shared the lowest values. He then added in lyrical analysis, using data from a crowdsourced database of sadness-inducing words, plus their lyrical density and weight in each Radiohead song, to create his own self-styled “gloom index” for the band’s output.

On his website, RCharlie details exactly how he did the analysis, including pulling data from Spotify's Web API and Genius Lyric's API, then conducting semantic analysis of the lyric data. He even gives you all of his R code. Here's a plot of his results, which is also a widget you can explore here. 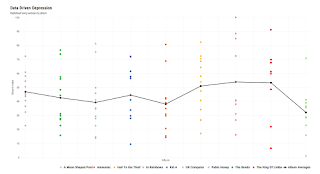