I is for Impression Formation 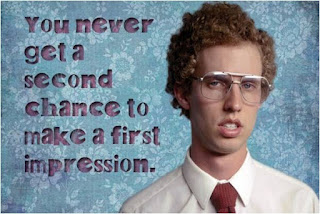 In fact a Google search of "how to make a good first impression" produced over 36 million results. Considering its importance, you probably won't be too surprised to learn that impression formation has been an important topic in social psychological research for decades.

Some of the first research on the topic was conducted by Solomon Asch. According to his work, when we make an impression of a person, we examine their traits on two basic factors: trait valence (a positive or negative evaluation of that trait) and trait centrality (or how important a trait is the person's identity - in a sense, the amount of weight we place on that trait in generating the impression). This particular form of impression formation is often known as the "cognitive algebra" approach, where the equation might look something like this:

This is a simplification, because a few other things are important, according to Asch's work, including primacy (first observations carry more weight - so yes, first impressions are important). In fact, when we make observations about others, we do so from the assumption that behaviors reflect stable personality traits, rather than momentary changes due to the situation (or what we call "states") and we like consistency (that is, the various traits have to mesh with each other, and so part of the changing impression of a person may be to make newly discovered traits "work" with previously discovered traits).

Of course, as we learned in the A post about the fundamental attribution error, we have a bias to assume behaviors, especially negative behaviors reflect traits, while we assume our own negative behaviors are the result of states. This bias certainly comes into play in impression formation, and we have a tendency to focus on negative behavior of others, even if that behavior has a rational, state-based explanation. Look for a future post on the "negativity bias" for more information!
by Sara at 8:00 AM