B is for Bandura

Albert Bandura is perhaps one of the most well-known social psychologists - in fact, a few other subfields of psychology probably want to claim him as a member as well. This is in part because his theories are widely applicable and highly influential. 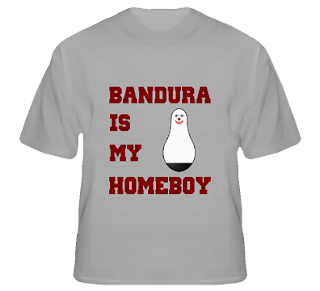 I blogged recently about one of his most well-known studies, the famous Bobo doll study he conducted in 1961 to examine how children learn aggressive behavior. In the study, he had children watch an adult playing with a Bobo doll aggressively (punching, kicking, etc.) or non-aggressively. The child was then given a chance to play with the Bobo doll, and observers recorded whether the child imitated the behavior s/he saw from the adult. Follow-up studies examined whether the model was equally influential if the children watched a film version of the behavior, or even a cartoon version of the behavior. Results were similar across these conditions.

Though this research obviously has direct application to understanding the link between media violence and aggressive behavior, this research served as building blocks for Bandura's social learning theory, which deals with learning by watching others, a concept called vicarious learning.

Previously, behaviorism was the main approach to understanding how people learn and the effects of rewards and punishments on our own behavior. Bandura's theory dramatically changed our understanding of learning, by showing that it occurs in a social context, and that watching others receive rewards or punishments for their behavior can influence our own behavior. Even more important, though the social context influences our behavior, we can also influence the social context - he called this concept reciprocal determinism: the environment shapes us, but we also shape our environment.

As Bandura continued testing and updating his social learning theory, he identified and developed a concept he called self-efficacy - a topic I currently study as part of my job.

According to Bandura’s self-efficacy theory, a person who possesses certain skills and abilities carries out a behavior, which results in particular outcomes. However, the individual has certain expectations or beliefs about his or her ability to carry out a behavior, which affect whether the person initiates the behavior and whether s/he persists in carrying out that behavior in the face of obstacles.

That is, provided the individual has or can learn the skills necessary to carry out the behavior, the individual’s beliefs about whether he or she is capable of carrying out that behavior will determine what the individual does next. That collection of beliefs is called self-efficacy.


A variety of sources can be used to figure out one's self-efficacy: direct experience with the behavior, learning from watching others, verbal feedback from others, and physiological states, such as anxiety.

Additionally, self-efficacy is made up of three dimensions: strength, or the intensity of one’s efficacy beliefs (are you really certain you can do it, or just kind of certain?); generalizability, or the belief that one’s skills are applicable to multiple situations; and magnitude, which refers to the difficulty of tasks one feels able to accomplish.

Bandura is also a prolific author of journal articles - many of which you can find online for free - and books. One of my favorites is, of course, his book on self-efficacy: 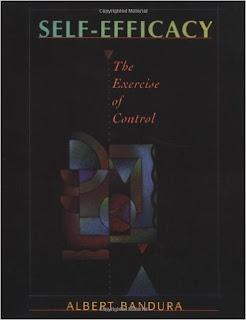