H is for A (Brief) History of Social Psychology

So far this month, I've tried to introduce you to some my favorite/the most influential ideas, theories, and people in social psychology. But one of my favorite things to teach in any course was the history of the course topic. (In fact, History & Systems, which is essentially a history of psychology course, was my second favorite course in college - first was Research Methods.)

That's why today I'm going to offer you a brief history of social psychology. The first use of the term "social psychology" was by Wilhelm Wundt (considered by most to be the father of modern psychology) in 1862. 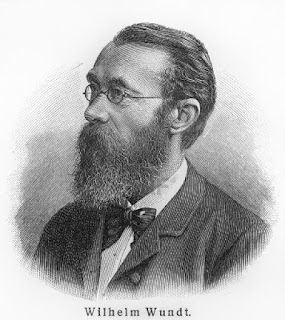 Unfortunately, his writings on the topic were not translated into English, and so they did not influence the stronghold of American social scientists.

However, in 1895, Norman Triplett of Indiana University did what is credited as the first social psychological experiment on a concept known as social facilitation. Essentially social facilitation occurs when the presence of others improves performance - for instance, when an athlete runs faster during the marathon than in her training leading up to it, or when a basketball player plays better in a game than practice.

But perhaps one of the most interesting developments in social psychology occurred in 1930s Europe, where a combination of Jewish persecution and a policy in the Soviet Union forbidding the use of psychological tests (which halted a great deal of research) resulted in many influential social scientists immigrating to the United States. Among these was Kurt Lewin, one of the most influential social psychologists ever; in fact, some consider him the father of social psychology. Look for a special post all about him soon!

In the 1950s and 60s, much of the research was inspired by the heinous acts in World War II - Adorno's research on authoritarianism, Asch's research on social influence, Festinger's cognitive dissonance theory, and of course, Milgram's famous study on obedience to authority. During this same period, research by social psychologists showing that segregation had negative impacts on Black children was also used in the famous Brown v. Topeka Board of Education decision.

In the 1970s through today, the face of social psychology changed once again. With the availability of new methods and devices to study thought and the human brain, many researchers began adding a cognitive component to their social psychological research. Some specify this as a new subfield called cognitive social psychology.

I think the main reason I love learning about history so much is because of a fascination with where we've been and an interest in understanding the trajectory of where we are going. I'll be very interested in seeing where the field of social psychology takes me next!
by Sara at 11:56 AM

Email ThisBlogThis!Share to TwitterShare to FacebookShare to Pinterest
Labels: blogging a to z, science, social psychology