C is for Conformity

Imagine you're participating in a study on perception. You're taken to a room with a group of 7 other participants, where you're shown one line, followed by three comparison lines; you're asked to identify which line is the same length and you'll state your answer verbally when the researcher calls on you. 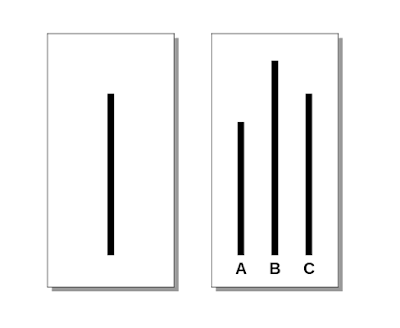 Since you're seated on the far right, the rest of the participants are asked to give their answer before you. Now imagine they all pick A. It's your turn - what do you say? Do you doubt your answer? Do you think maybe you misunderstood the task? And of course, the big question: Do you go with the (incorrect) response of the group or give your own answer?

As you might have guessed, this famous study, conducted by Solomon Asch in 1951, was not about perception, but about conformity. Conformity occurs when you match your thoughts, feelings, or behaviors to others, usually a group. Once again, the group doesn't need to be present, as it was in this study. In fact, people tend to follow group norms, even when they're alone. Even if conformity affects someone's behavior, it may still be private behavior, like anonymously signing a petition or voting for a particular candidate.

This effect is even more pronounced if you identify strongly with the group. For instance, if you identify strongly as a Democrat, you might shape your attitudes and beliefs to be in line with what the majority of Democrats think and believe. And conformity can take on different forms - a person may follow the group without changing his/her opinion (known as compliance) or may genuinely accept the stance of the group by changing behavior and beliefs (known as internalization).

Conformity is not always a bad thing, as it can promote group cohesion and increase a group's influence. Additionally, research by Sherif (who was involved in some important research I'll talk about later this month) found that people often conform when they're put in a situation where they lack the skills or abilities to respond. In these cases, drawing upon other group members' responses can help supplement a lack of knowledge.

Obviously, there are darker sides to conformity as well. Peer pressure, especially when it results in poor decisions and outcomes, is one example of the negative side of conformity.

Another example is groupthink; this occurs when a group's desire for consensus in decision-making leads them to consider less information, suppress controversial and dissenting views, and make worse decisions than an individual would on his/her own. Groupthink is more likely to occur in groups with little diversity - the same kind of groups where forces to conform are strongest.

So how would you react in the situation above? Your response may depend in part on your culture. People from individualistic cultures, like the United States, are less likely to conform than people from collectivist cultures, where social cohesion is more important. Though one could argue that adopting a cultural norm to "be unique" is still conforming in some way.
by Sara at 2:03 PM