Z is for Robert Zajonc

Here we are at the end of A-Z, so what better way to end it than by discussing one of the most influential social psychologists, Robert Zajonc (pronounced Zah-yuntz). 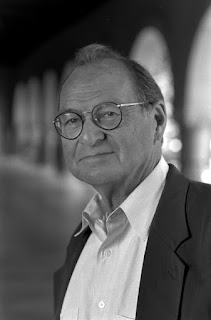 His contributions to the subfield are numerous, and he is apparently the 35th most cited psychologist of the 20th century. Some even state that he is one of the "creators" of modern social psychology, and his work is certainly partially responsible for the shift to "cognitive" social psychology. One of his best known contributions is the mere exposure effect, but much of his work is linked to this concept, in its focus on how presence of and exposure to others changes us cognitively and even physically.

The mere exposure effect deals with the attitude change that naturally occurs as something/someone becomes more familiar to us. That is, as we continue to be exposed to a person, place, or object, our attitude naturally becomes more positive. Once again, this simple concept has many important applications, but one of the most striking is in using the mere exposure effect to improve relations with certain groups, such as groups that are often the target of prejudice and discrimination. Having friends who are of different races, sexual identities, and so on, reduces your feelings of prejudice toward those groups. This finding offers an important rationale for the need for diversity in schools and workplaces.

Zajonc also studied social facilitation, finding that it occurs not just in humans, but animals and even cockroaches. And he and a colleague (Greg Markus) are also known for the Confluence Model, which deals with birth order and intelligence. According to this theory, first-born children are more intelligent, because they are born into adult-only environments, and also, if they eventually have younger siblings, they are involved in teaching those children. Last-born children are born into the most mixed adult-child environment, and also do not have the opportunity to teach younger children, resulting in lower intelligence. However, the magnitude of this impact on intelligence tests is small, about 0.2 standard deviations.

What many of his research has in common is the focus on cognition, but also on how affect (emotion) comes into play. This work culminated in his address for the Distinguished Scientific Contribution Award from the American Psychological Association: Feeling and Thinking, Preference Needs No Inferences. You can read the address/article for free at the link, but in short, Zajonc found that cognition and affect are two separate systems, but affect is more influential and experienced first. Cognition - the more systematic, rational approach - takes time and mental energy. Emotions are often automatic.

Because we're cognitive misers, we tend to gravitate toward the easy approach when making decisions, so we often let our emotions guide us. As I wrote in the Quick v. Slow post this month, decisions made through this faster, automatic channel are not necessarily wrong, nor are decisions made through the slower, systematic channel necessarily right. They are simply different approaches to a problem, and the proper approach really depends on the situation. However, social psychology as a field had started to focus too heavily on cognition, avoiding affect or emotion, which gave an incomplete understanding of social psychological concepts. Zajonc's work encouraged researchers to once again consider affect in their work.

Email ThisBlogThis!Share to TwitterShare to FacebookShare to Pinterest
Labels: blogging a to z, cognition, social psychology