Want to Write a Bad Novel with Me?

November is 8 days away! What? When did this happen?

I know, hard to believe. And I'm super excited because I can't wait to start on my novel for NaNoWriMo. In fact, I keep oscillating between two different story ideas, so I'm tempted to sit down in front of my computer November 1st and see what I start typing. Will it be my story of an introverted hero who turns the comic book genre on its head? Or the story of a woman who loses her job, moves back in with her parents, and sees where her childhood friends have ended up (for better or worse)? Or maybe something else entirely...

So I was thrilled when a non-writing newsletter I subscribe to included a link to this blog post by Beth Skwarecki on how she binge writes bad novels every November. And she urges you to do the same - because writing a book in 30 days means you have to adopt some rules: just keep writing, don't edit and don't look back:


50,000 words in a month is 1,667 per day. At an average typing speed, you could finish your day’s quota in an hour. But that assumes you already know what you’re going to write.

After agonizing over the first chapter for days, I realized that I could not make each chapter perfect the first time. I started writing chapters quickly, badly, with notes about what to fix when I had the time. Pretty soon the book was flying along, and I even had time before deadline to go back and edit it to perfection. If I had insisted on polishing each chapter as I wrote it, I never would have finished.

Rewriting might make your first chapter better, but it will not get you any closer to your goal of actually finishing a draft of a novel. As NaNoWriMo founder Chris Baty says, revisiting what you’ve already written is like turning around in the middle of a marathon to try to run the earlier miles better.

So when anybody would ask if a novel written in a month-long haze of caffeine could possibly be any good, I gleefully answered that of course my novel will be terrible!

And that’s why you write another draft. But don’t worry about that now. Edits are for December.

And if you want to procrastinate during your writing learn some tricks of the trade, Beth recommends this blog.

I'll probably be carrying my laptop or at least a notebook with me most of the time in November. I have my morning and evening commute, during which I can write, and I've found some great coffee shops and bars near my job that are quiet enough to hang out and write in during evenings after work.

I'm planning on adding a widget to this blog to show where I am in terms of word count. 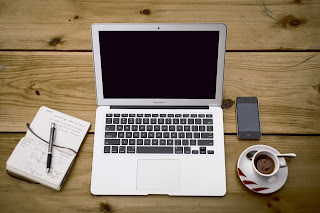