I'm preparing once again to write 50,000 words in November, as part of National Novel Writing Month (or NaNoWriMo). October is affectionately known as "Preptober" - it's the month where NaNoWriMos go through whatever planning they need to do to win (i.e., get 50,000 words).

As I've blogged before, I'm a plantser: I like having some freedom to see where the story takes me, but I need a roadmap or I get overwhelmed and don't finish. This makes me a sort of hybrid of the plot-driven writers, like Orson Scott Card, and the character-driven writers, like Stephen King.

Speaking of Stephen King, as part of Preptober, I've been reading advice on writing, and yesterday, just finished Stephen King's book on the topic: 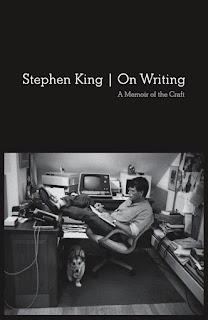 It was nice to learn more about his approach, because last year, I really didn't think his approach was for me. I'd tried just sitting down and writing, seeing where I ended up, and that has worked reasonably well for me on short stories, but for something as long as a novel, I get blocked.

What Stephen King does is he comes up with a situation, which may also include where he thinks things will end up when he's finished writing. Then he comes up with the characters and develops them as they encounter the situation. And that's when he lets things just... unfold. The characters tell him where things go.

This may sound crazy to a non-writer: the characters tell him... They're creations of the author, so how could they tell the author what to write? It's a very strange thing when you're writing, and you create characters that take on a life of their own. I've had this experience several times when I was writing Killing Mr. Johnson, the book I worked on for last year's NaNoWriMo (a book I still need to finish). In fact, I was thinking about the story the other day, and trying to understand a character's motivation for doing something in the story. She reacted in a strange way to the chain of events, and as I was thinking about her, I realized why - or rather, she told me why. And it all made sense. I also have a couple of characters who are demanding more attention, so I plan on writing a few more scenes for them.

For this year's NaNoWriMo, I'll be working on a new idea. And I'm going to try taking the Stephen King approach, at least in part. I already know approximately how things are going to end up, and I've been working on developing the characters. In November, I'm going to try just sitting down and writing. We'll see how it goes.
by Sara at 9:25 AM