In the early 1990s, anthropologist Robin Dunbar suggested that there was an upper limit to the number of people one can include in his or her social circle. That number, known as Dunbar's number, is typically about 150. This limit, he argues, is based on brain size. There's a limit to how many people we can keep on our mind.

In more recent years, Dunbar has taken into account strength of emotional connection, which helped him identify circles of friends, from those we are closest to emotionally (5, our best friends), the next layer (10, close friends), the next (35, people we encounter regularly but aren't especially close to), and the last layer, those we are least close to (100, acquaintances).

Today, a friend shared some recent research that was able to use mobile phone records to test these numbers in real-world settings. A summary of the research is available here. To conduct their analysis, they used records of about 6 billion calls involving 35 million people from an unnamed European country, and used the following to help isolate their sample:


To screen out business calls and casual calls, Dunbar and co include only individuals who make reciprocated calls and focus on individuals who call at least 100 other people. That screens out people who do not regularly use mobile phones to call social contacts.

They used a computer algorithm to look at clusters of results, patterns of calling that would coincide with different levels closeness. The average size of the inner circle was 4.1, not far off from the 5 estimated above. In fact:

“These numbers are a little smaller than the conventional numbers for Dunbar layers, but within their natural range of variation,” they say. The numbers could be smaller because mobile phone data captures only a portion of a person’s total social interactions.

The team also finds some evidence of an extra layer among some people. “This could, for example, mean introverts and extroverts have a different number of layers of friends,” they suggest. But interestingly, extroverts, while having more friends, still have a similar number of layers.

So don't feel bad if you see someone who seems more popular or has more friends. Chances are, their friend circles are quite similar to yours. 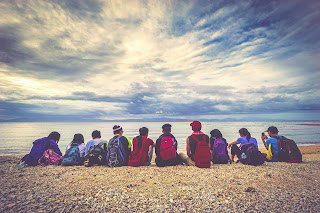