Everything in Moderation: The Goldilocks Hypothesis

Psychologists (and others) have spent decades studying things that may or may not be harmful. Most recently, digital media, such as the internet or video gaming, has gotten that attention, with people arguing whether or not such media is harmful. Hypotheses range from 1) it's helpful, but mostly for people with social anxiety because it gives them a more comfortable outlet for interaction, to 2) it's harmful, because it encourages people to forgo real interactions for fake ones, and everything in between.

But as with many things, the real relationships is probably more complex. For instance, it doesn't have to be a linear relationship of more use = more harm. It could be beneficial up to a point before it starts being harmful. This is the basis of the so-called Goldilocks hypothesis: Too little doesn't really do anything (good or bad) and too much is harmful; there is some level in between that is "just right."

A recent study published in Psychological Science set out to test this hypothesis among adolescents:


The research reported here was the first to systematically test for curvilinear relations between well-being and screen time measured continuously, separately for different digital activities and days of the week. As predicted by the Goldilocks hypothesis, we expected to find curvilinear associations, with no costs to mental well-being for moderate levels of screen time and some detriments at high levels. For the first time in this area of research, we defined low and high levels of screen time empirically by testing for local maxima, the inflection points, operationalized as the points at which the slopes relating screen time to well-being approached zero before reversing in sign. Thus, we identified the point at which each type of media use shifted from having a null or positive relation with mental well-being to having a negative relation indicating a detrimental effect.

Basically, if you plot the relationship between screen time and some measure of well-being, they expected it to look something like this: 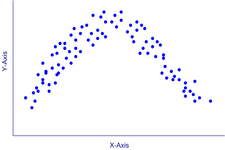 You can't draw a single line through this - you would need to draw a curve. But another approach mathematically would be to draw many lines, to represent the different trends in the data at different points. The researchers looked for the point where a single line drawn through part of this figure was basically horizontal (a slope of 0), followed by another line that goes downward (negative trend). That is the local maxima - the point where screen time has the strongest effect on well-being and also the point at which additional screen time starts becoming harmful.

What's also cool about this study? They had over 120,000 participants! And here's what they found:


Local extrema were at 1 hr 40 min for weekday video-game play and 1 hr 57 min for weekday smartphone use. In contrast, watching videos and using computers for recreational purposes appeared to be less potentially disruptive at these levels, as the local extrema for these activities on weekdays were 3 hr 41 min and 4 hr 17 min, respectively. Indeed, some digital activities might be better suited than others to weekdays. For example, it is relatively easy to switch between different tasks using a computer, whereas an activity such as playing a video game requires more dedicated attention. For weekends, the derived inflection points ranged from 3 hr 35 min for playing video games to 4 hr 50 m for watching videos. Thus, the pivot points between moderate and potentially harmful screen time were notably higher and less variable for weekend days than for weekdays, which suggests that the nature and amount of engagement matter for understanding the relations between digital-screen time and mental well-being.