So 2016 was a bad year for many of reasons, but it was apparently a great year for movies. The Blacklist looked at the top 10 movies of the year, according to Metacritic, and compared their performance to the top 10 from previous years (going back to 2005). The top 10 from 2016 had the second highest average rating, the highest going to 2013 (the year that gave us 12 Years a Slave, Gravity, and American Hustle, among others). 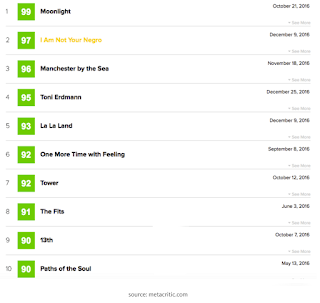 For comparison, 6 of these films have been nominated for at least one Academy Award.
by Sara at 10:09 AM