On What It Means to Be an American

I've heard many people on Facebook today arguing for opponents of Trump to be supportive and respectful.

Yeah, sure. I think that goes without saying. I'm happy to be supportive and respectful of my fellow humans.

But it's more than that. It's things like, "You may not like the guy, but he's our President, and you should support him." Or "Wanting him to fail is like wanting the pilot of the plane we are all on to crash." Or "We didn't act like this when Obama was elected, so suck it up."

This is different from what I think when I hear the words "support and respect." This is not about "supporting someone because they are human like you"; this is, "you need to go along with him on everything he does." And so, I'd like to respond.

There have been many responses to the latter, highlighting that, no, you guys weren't so reasonable when the candidate you didn't like was elected. Many people are saying "Not my President" with regard to Trump, which you find disrespectful. No offense, but wasn't the same slogan used with regard to Obama. Anyway, I won't belabor that point here.

But to the first in particular, no, I don't like the guy. I think he's bad for this country, and his actions within the first hours as President affirm some of my fears about him. (True, this is because all content specific to the Obama administration has been migrated to ObamaWhiteHouse.gov, and the WhiteHouse.gov site is now sparsely populated until the new administration settles in.) I fear that he will keep many of his campaign promises that go against the very nature of this country: registries, a giant wall, and so on.

But it goes beyond that. It is our civic duty to question our leadership. I don't have to fall in line with his rhetoric. I don't have to stand idly by as he does whatever he wants because he is the President.

I can respect the position of President, but that doesn't mean I have to respect the man. It is the position that warrants our respect, as citizens of this country. What the position stands for - not an elected king, but someone who leads the country for a time, who is elected by and for the people.

The man (or woman) who occupies that position is a temp. We choose someone to speak for us as our leader, but if he begins to speak out of turn, if he says things we don't agree with, it is our duty to let him know.

And there are options to help protect us from what turns out to be a bad leader - a limited term, so that we can elect someone else in four years, and also ways to remove him/her from office (impeachment is obviously unusual, but it has happened). And just as Trump is showing that he has the power to undo the executive orders issues by Obama, so too will the person elected after have the power to undo Trump's orders.

So, no, I won't like the guy. I won't respect the guy. And I certainly won't support him when he does things I disagree with. I plan to stay informed and stay involved, question my leadership, and speak out against injustices by this administration. It's my civic duty. 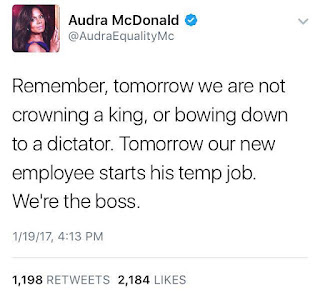