Snapshot of the Nation: Pre-Inauguration

Yesterday, Gallup released the results of their Mood of the Nation survey, which assesses satisfaction with a variety of policy and life issues. This survey, conducted between January 4th and 8th assessed satisfaction with 28 items, ranging from policies (on guns, energy, and abortion, to name a few) to the environment to business and industry.

At the top of the list with 80% is overall quality of life. At the bottom? Race relations at 22% and the nation's efforts to deal with poverty and homelessness a close second at 23%: 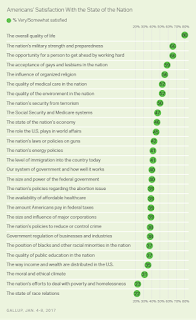 This year, just 22% say they are satisfied with the state of race relations, putting it at the bottom of the list along with the nation's efforts to deal with poverty and homelessness (23%). Anti-poverty efforts have always ranked near the bottom of the list. Race relations had ranked higher in the past, including a tie for fourth place in 2014, before a series of deadly incidents between police and young black men changed perceptions.

Analysis by political ideology found that Democrats were overall more satisfied than Republicans, though Republicans were more satisfied on certain issues, such as gun laws, the influence of organized religion, and the distribution of income/wealth. It will be interesting to see how these data change post-inauguration.
by Sara at 8:00 AM