Commentary on the American Divide from David Myers

If you took Introductory Psychology or Social Psychology, it's quite possible your textbook was by David Myers, who in addition to writing textbooks and researching psychological topics, maintains a blog called "Talk Psych." Yesterday, Dr. Myers discussed recent Gallup poll results showing that 77% of Americans perceive our nation to be divided: 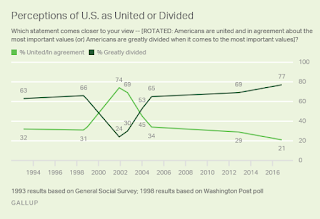 All major subgroups of Americans share the view that the nation is divided, though Republicans (68%) are less likely to believe this than independents (78%) and Democrats (83%). That is consistent with the findings in the past two polls, conducted after the 2004 and 2012 presidential elections, in which the winning party's supporters were less likely to perceive the nation as divided.

In fact, the most recent time that Americans believed America was more united than divided was following the 9/11 attacks, which psychological theorists argued prompted unity through a concept known as terror management theory: we respond to existential threat (reminders that we are mortal and will die, known as mortality salience) by strengthening our ties to others and reaffirming our identities. This was how many explained, for instance, the upswing in flag display and other symbols of our country (in fact, see a previous post on these concepts).

David Myers offers a social psychological explanation for this "record-high" in perceptions of division:


A powerful principle helps explain today’s deep divisions: The beliefs and attitudes we bring to a group grow stronger as we discuss them with like-minded others. This process, known to social psychologists as group polarization, can work for good. Peacemakers, cancer patients, and disability advocates gain strength from kindred spirits. In one of my own studies, low-prejudice students became even more accepting while discussing racial issues. But group polarization can also be toxic, as we observed when high-prejudice students became more prejudiced after discussion with one another. The repeated finding from experiments on group interaction: Opinion-diversity moderates views; like minds polarize further.

Group polarization feeds extremism. Analyses of terrorist organizations reveal that the terrorist mentality usually emerges slowly, among people who share a grievance. As they interact in isolation (sometimes with other “brothers” and “sisters” in camps or in prisons), their views grow more extreme. Increasingly, they categorize the world as “us” against “them.” Separation + conversation = polarization.

The Internet offers us a connected global world without walls, yet also provides a fertile medium for group polarization. Progressives friend progressives and share links to sites that affirm their shared views and that disparage those they despise. Conservatives connect with conservatives and likewise share conservative perspectives.

The very forces and media intended to bring us together can actually drive us apart.
by Sara at 8:00 AM