Americans Are Dissatisfied, But No More Than Usual

A recent Gallup poll measuring American's overall satisfaction with how things are going in the US found only 27% are satisfied. This is below the overall average (37%) since Gallup began doing this poll but not to worry - it's no worse than the averages from 2012 to now:


In the past decade, the U.S. has faced a range of domestic and international challenges including the Iraq War, the global financial crisis, several high-profile mass shootings, increased racial tensions and partisan gridlock in the federal government -- all of which could have negatively affected Americans' perceptions of the way things were going in the country.

Additionally, this figure is similar to what Gallup saw right after the election. And it shouldn't be too surprising that satisfaction levels are related to political affiliation, but not exactly in the way you would think:


Twenty-four percent of Republicans in December are satisfied with the way things are going in the U.S., up from 17% last month. While still low overall, it is Republicans' highest satisfaction level since right before the 2008 presidential election, which ended eight years of Republican leadership in the White House. Republicans' anticipation of President-elect Donald Trump's transition has likely boosted their satisfaction with the nation's direction.

Although Democrats' satisfaction levels have dipped recently, their 2016 average (43%) is still higher than that of Republicans (12%). 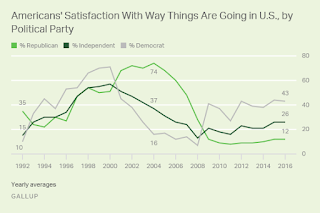