New Survey of Americans Who Are Transgender


It found that 12 percent of transgender people were verbally harassed in public restrooms within the previous year, 1 percent were physically attacked and 1 percent were sexually assaulted. Nine percent said someone denied them access to a bathroom.

Besides the restroom data, the survey turned up new findings, including that 29 percent of transgender people were living in poverty compared to 14 percent for the U.S. population at large, and that 39 percent experienced serious psychological distress within the previous month, nearly eight times the rate for the general population.

This is only the second large survey of transgender persons; the first, the "National Transgender Discrimination Survey" was conducted in 2008 and 2009, and published in 2011. Until now, researchers have depended on that data to answer their questions, but there were some problems with how the survey was conducted. Most importantly, it was not conducted in a way to allow researchers to generalize findings to the population of transgender persons. This means that they were unable to determine whether certain issues and experiences were more or less common among transgender persons than they were among the general population. The new survey does allow those comparisons, hence the text above highlights the difference between transgender persons and the general population in terms of poverty, psychological distress, and suicide attempts.

The survey was conducted before the North Carolina House Bill 2 was passed - a bill that requires transgender persons to use the restroom corresponding to the gender assigned at birth. This bill caused much controversy, with many boycotts and protests, and it likely cost Governor Pat McCrory the election (he finally conceded, BTW).

So the tl;dr: transgender persons are the victims, not the perpetrators, in public restrooms. It's time we stop arguing bathroom bills are about anything more than hatred and discrimination. 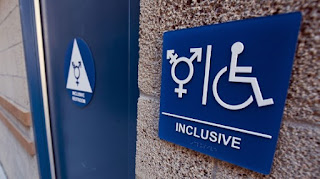