In a fitting end to the craziest year I've witnessed, Donald Trump has been selected as Time Magazine's Person of the Year:


Time magazine, unsurprisingly, has named President-elect Donald J. Trump its person of the year for 2016, calling him the “president of the divided states of America.”

Mr. Trump was not happy about that title, but called his selection a “tremendous honor.” 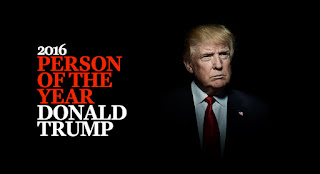 A friend on Facebook pointed out that Time has often selected highly controversial, even dangerous, figures for this title, and so it's not really an honor. But we shouldn't be too surprised, given that many people have painted Trump as a narcissist. In fact, see this great post for more discussion on that. And for a narcissist, there is no such thing as good or bad publicity. Attention, positive or negative, feeds their egos.

Trump is many things but I don't think he's stupid. He must know that when he unleashes a Twitter war on something, it's only going to fuel that thing.

For instance, when he goes to Twitter to complain about Alec Baldwin's portrayal of Trump on SNL sketches, he has to know that his tweets won't make SNL stop doing these sketches - if anything, they'll do more of them. And that's what he wants. The opposite of being loved isn't being hated; it's being ignored completely. The worst thing that could happen to Trump, in his opinion, is if all of a sudden, no one is talking about him, no one is noticing him, no one is lauding or complaining about him.
by Sara at 9:10 AM