That Settles It - I'm Possessed By a Ghost

Last night, some lower back issues I've had on and off for the past few years resurfaced. Today, sitting and walking are particularly painful. I'm at work, but probably heading out soon and working from home for the rest of the day.

The pain started right after I finished some Christmas shopping, carrying bags that were way too heavy for me while rushing to my car to get out of the frigid wind (which was so strong where I was, it was almost blowing me backward). Why Chicagoland loves outdoor malls so much is beyond me. But today, a friend shared an article on Facebook that suggests my back ache may have nothing to do with carrying heavy things. I could be possessed by a ghost. According to the article, symptoms of ghost possession can include headache/migraine, severe back ache/inability to move, and difficulty sleeping. Oh, and the article also says that 85% of gay people are possessed by ghosts.

Yeah, you read that right:


The main reason behind the gay orientation of some men is that they are possessed by female ghosts. It is the female ghost in them that is attracted to other men. Conversely the attraction to females experienced by some lesbians is due to the presence of male ghosts in them. The ghost’s consciousness overpowers the person’s normal behaviour to produce the homosexual attraction. Spiritual research has shown that the cause for homosexual preferences lie predominantly in the spiritual realm.


In fact, there's apparently an epidemic of ghost possession, because 30% of the world's population is possessed by ghosts. 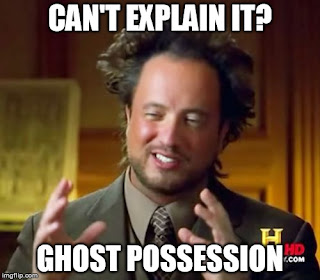 Thanks for the laugh, internet. That's some of the most creative nonsense I've read in a while.
by Sara at 12:05 PM