What Would I Do If I Could Feel?

In one of my favorite childhood stories, The (Wonderful) Wizard of Oz, the tin man was unable to feel emotions because he did not have a heart. He, Dorothy (with her dog, Toto) the Scarecrow, and the Cowardly Lion make their way to see the Wizard of Oz in the Emerald City so that each can get their heart's desire (pun fully intended). Though in the book, the Wizard fools each character into thinking he has actually given them what they want, in the MGM movie version as well as one of the best adaptations of the source material (The Wiz), the realization is that each character had what s/he wanted all along. They just didn't see it, and their thinking had blinded them to the strengths they already possessed.

Though these are just stories, research suggests that how we think about ourselves and our abilities impacts our reality. It can actually change us, for better or for worse. Today in "This Week in Psychological Science," I learned about a new study that finds how we think about emotions actually impacts how they are represented (and experienced) in our brains. Specifically, the researchers set out to examine thinking about emotions as categories, or thinking about them on a continuum:


An important aspect of emotion perception that has been overlooked concerns the difference between the continuous nature of the sensory inputs that people receive and the categorical nature of their thinking about emotion. In facial expressions, the contractions of various facial muscles can vary continuously to create gradations of movements (Jack & Schyns, 2015). But people typically talk about these expressions in categorical terms, calling them expressions of “fear” or “calm,” for instance (Barrett, 2006).

Whether we think about emotions continuously or categorically does have some important ramifications. A nuanced view of emotion can make us better at detecting how others are feeling, while thinking about them in categories means that a facial expression or behavior has to reach some threshold before we decide the other person is feeling a certain emotion. This would in turn impact our behavior and interactions with others. It might also impact how we manage our emotions. Viewing emotions continuously also allows us to understand more complex emotions, made up of combinations of the basic emotions. According to Ekman, there are 7 basic emotions: 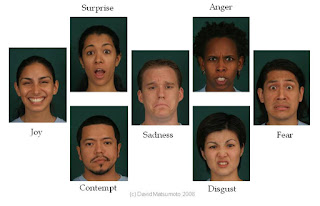 They conducted two studies, in which participants examined pictures portraying emotions while undergoing MRI. In the first study, participants saw faces displaying fear or calm to varying degrees, and either categorized them or marked where they fell on a continuum for "fear" and "calm." In the second study, participants judged their own responses to graphic images, either as categorically "bad" or "neutral" or along a continuum. They found different levels of activation in parts of the brain responsible for emotion, specifically the amygdala and the insular cortex (the part of the cerebral cortex closest to the amygdala and other structures in what is known as the midbrain):

Activation was greater when the perceived intensity of the negative emotion was greater. When people were only given categories to work with, they had to force pictures into those holes, even when the displayed emotion wasn't very extreme. So a picture showing very mild fear that a participant categorized as fearful produced greater activation in those parts of the brain. Activation was lower when the perceived intensity of the positive or neutral emotion was greater. Allowing a "gray area," through use of a continuum, would allow for more accurate perception, while being forced to use categories may change perception, leading people to perceive the target as being more similar to the category selected. Obviously, this goes beyond emotions, and could have some important implications for other work involving categories, such as stereotypes.
by Sara at 10:00 AM