Time for another Totally Superfluous Movie Review of one of October's viewings: Contracted. 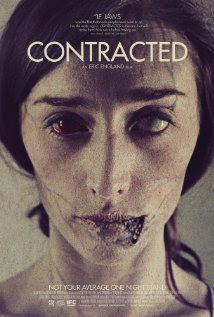 The movie follows a young woman named Samantha Williams, as she bumbles from one bad situation to another. It starts with a man (who we later learn is named BJ) having sex with a corpse in the morgue. (It doesn't actually show that, but it's pretty obvious that's what is happening.) We also notice the corpse has a biohazard toe tag.

In the next scene, Samantha is attending a party thrown by her friend Alice. Before entering the party, Samantha calls and leaves a message for a woman named Nikki, who we gather is or was Samantha's girlfriend. Both women work for the same restaurant, Samantha as a server and Nikki as a bartender. Samantha asks Nikki to meet her at the party after she gets off work, but doesn't seem optimistic that Nikki will show up. Samantha greets Alice, who asks after Nikki. Samantha brushes off the question, then excuses herself to the bathroom. On her way there, she encounters Riley, who clearly has a crush on Samantha and is jealous of Nikki, and Zain, Samantha's former dealer.

After returning from the bathroom, Alice hands Samantha shot after shot, and the two get very drunk. A drunk Alice humiliates Riley over his feelings for Samantha, and Samantha notices BJ watching her throughout the party. While stumbling around in the kitchen, BJ approaches Samantha and hands her a cup that he insists is her drink. Samantha is so intoxicated, she states she doesn't remember having a drink in her hand, but accepts it without question. He asks if Samantha is seeing anyone, and she tells him about Nikki. Later, BJ takes Samantha back to his car, and has sex with her despite her requests for him to stop. (This is one point of contention on the movie. The filmmaker describes it as a one night stand, while others recognize it for what it is: rape.)

Samantha wakes up the next morning in her bed, with no memory of how she got there, and feeling very hungover. She fights with her mother, Nancy, who disparages Samantha's "lifestyle choices" (specifically, being in a relationship with a woman, as well as sleeping later after going out to a party). Nancy also expresses fear that Samantha has relapsed into hard drug use - we find out later that her drug of choice was heroin. Samantha talks to Alice, who mentions the police were asking about a man named Brent Jaffe who was at the party. Since he introduced himself as BJ, rather than his full name, Samantha doesn't initially make the connection that the police are looking for the man who raped her until much later in the movie. Over the course of the next few days, Samantha starts developing some horrifying symptoms, including an extremely heavy period, bright blue veins on her lower abdomen, and red eyes, and worries that this is something worse than a hangover.

Samantha goes to see a doctor about her symptoms, and he finds that she has an extremely low heart rate and infections in both her ears. When she shows him the veins on her abdomen, he asks if she had unprotected sex. Though she argues that she is in a relationship with a woman, and has been for many months, she finally admits that she had sex with a man the night before. She never describes it as rape though, and seems more interested in hiding it from people, especially Nikki, who she is trying to rekindle her relationship with. The doctor draws some blood to figure out what she has. But the symptoms continue to worsen rapidly.

The film has almost no likeable characters, and most of them are walking stereotypes. Nancy is a controlling mother, Alice is just a party girl stereotype, Riley is that guy who describes himself as nice but would take advantage of the girl he likes at first opportunity, and Nikki is somehow both territorial over Samantha while clearly demonstrating she's just not that into her. And BJ - well, who could possibly identify with a character who must view necrophilia as great practice for raping intoxicated women? The only one you could maybe identify with is Samantha, because the initial actions of the story are not her fault, but as the movie goes on, she just digs herself in deeper.

Reading up on the film, I found out the filmmaker's goal was "to tell a story within the virus/infection subgenre like we’ve never seen before. I’ve recently become interested in using sex as a device to drive genre films because it’s something most people can understand and relate to, so your story inherently feels familiar to the audience." What it ends up being is a movie that punishes a girl for being gay and/or getting drunk, through rape followed by an infection that rapidly changes her physically and emotionally. After the party, her motivation seems to be getting Nikki back and hiding what happened/is happening to her.

In doing research on the movie for this post, I learned a few new terms, including body horror (a gross-out genre of horror that focuses on physiological changes, as the character turns into a literal monster), and mumblecore, a genre of independent film that focuses on naturalistic dialogue over plot development. Some well-known examples of mumblecore are Slackers and Clerks. When combined with the horror genre, it's often called mumblegore.

If you're looking for a good horror movie to check out this October, I'd give Contracted a pass. But if you want a modern example of how the horror genre punishes people, especially women, for being sexual beings, Contracted is definitely that.
by Sara at 1:00 PM