Trying to Be Less Dumb

Previously, I blogged about a book called You Are Not So Smart. Last night, I started the sequel, You Are Now Less Dumb: 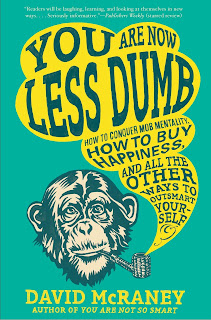 As the previous book, it deals with cognitive biases, which I've blogged about before. But while the purpose of the previous book was to make you aware of these various biases, the goal of this book is to help you "learn from failings" and "feel more connected with the community of humanity." Less succinctly:


You think seeing is believing, that your thoughts are always based on reasonable intuitions and rational analysis, and that though you may falter and err from time to time, for the most part you stand as a focused, intelligent operator of the most complicated nervous system on earth. You believe that your abilities are sound, your memories are perfect, your thoughts are rational and wholly conscious, the story of your life true and accurate, and your personality stable and stellar. The truth is that your brain lies to you. Inside your skull is a vast and far-reaching personal conspiracy to keep you from uncovering the facts about who you actually are, how capable you tend to be, and how confident you deserve to feel.

You may wonder why, as a psychologist who is familiar with much of this research, I would read this book. Wouldn't it make sense for someone without that knowledge and education? But the thing I love about reading these types of books, especially when they accurately discuss the research, is that I come away with new insights and connections. I also enjoy some of the different anecdotes and findings they bring in from other fields, that help give me a wider view and understanding. For instance, in the first chapter, McRaney talks about the importance of narrative in understanding ourselves and others. Part of his evidence for the importance of these narratives? Centrifuges.

Applying g-forces to the human body can have many interesting effects - not just pushing the body around, but also (when one "pulls too many g's") keeping blood from getting to your brain. As a result, you pass out. The Air Force and places like NASA use centrifuges as they teach pilots techniques they can use to keep blood in their brain, and keep themselves from passing out. During practice, many of the pilots pass out, and interestingly, they may report visions and hallucinations - which sound strikingly similar to visions reported by people with "near-death experiences":


The tunnel, the white light, friends and family coming to greet you, memories zooming around--the pilots experienced all of this. In addition, the centrifuge was pretty good at creating out-of-body experiences.

As Whinnery and other researchers have speculated, the near-death and out-of-body phenomena are both actually the subjective experience of a brain owner watching as his brain tries desperately to figure out what is happening and to orient itself amid its systems going haywire due to oxygen deprivation. Without the ability to map out its borders, the brain often places consciousness outside the head, in a field, swimming in a lake, fighting a dragon--whatever it can connect together as the walls crumble. What the deoxygenated pilots don't experience is a smeared mess of random images and thoughts.

Narrative is so important to survival that it is literally the last thing you give up before becoming a sack of meat.