We all have role models we aspire to be like, who help us be the best we can be. But we probably also have people who are the opposite of that - sort of anti-role models that we learn from by counter-example. If we do what our role models do, and avoid doing what are anti-role models do, we can (hopefully) be our best self. I've said in the past that I became a good teacher from both my great teachers and my awful ones. And, as I blogged about on the topic of meta-analysis before, the techniques for the earliest meta-analysis were established by Glass doing basically the opposite of what Eysenck did. 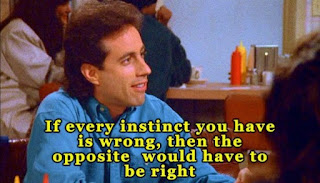 Today, I learned about a process that uses the nature of counter-example to generate new ideas. It's called "reverse brainstorming:"


Instead of asking participants to come up with great ideas for improving a process or achieving a goal, you ask them to instead brainstorm ways to absolutely undermine a process or make a goal impossible to achieve. You let all those pent-up negative thoughts bubble to the surface. This provides the group with useful information about what isn’t working. Once you know what isn’t working, of course, you have the tools you need to plan for success.

According to the post, this approach works best when a group is burned out or lacking enthusiasm about a project, or when a particular process has become so established it's difficult to break out of it. It also gives group members a chance to vent their frustrations.
by Sara at 1:00 PM

Email ThisBlogThis!Share to TwitterShare to FacebookShare to Pinterest
Labels: cognition