In the words of one of my favorite characters, Gregory House: 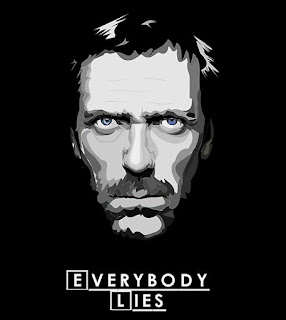 One lie can easily turn into two, and small lies can easily become big lies. And today I encountered some recent research that suggests why.

Whenever you tell a lie, you experience a little twinge of emotion - usually guilt. That guilt may not be enough to keep you from lying, especially if the lie benefits you and does not necessarily hurt someone else. And past research has shown that increased exposure decreases our emotional response over time. So just like your first break-up is likely to hurt a lot more than your fifth break-up (cue "The First Cut is the Deepest"), the guilt you feel from your first lie is going to be much greater than the guilt you feel after lie #793.

To test this hypothesis, and get at the specific brain response to lies, researchers had people participate in a game while undergoing functional Magnetic Resonance Imaging (fMRI):

The researchers observed dishonesty escalation - that people became more dishonest over time - when it was self-serving. This was the case even when the lie hurt the other person, though people were more likely to be dishonest when served the other as well. (So they still lied if it hurt the other, but not as much as if it helped the other.) Results from the brain scan showed reduced amygdala activity over time. As I've blogged about previously, the amygdala, part of the mid-brain, is involved in emotional response.