The Unpopularity of Presidential Pardons

Following up on yesterday's post about the Arpaio pardon, here's an article from FiveThirtyEight examining Presidential pardons over the year, highlighting not only the unpopularity of these pardons, but what makes Trump's pardon of Arpaio so unconventional:


Several political allies and foes immediately condemned the move as inappropriate and an insult to the justice system. But most of the criticized characteristics of Arpaio’s pardon have at least some parallels to previous ones.

The number of controversial characteristics of the Arpaio pardon, however, is unusual and raises questions about the political fallout that Trump will face. The Arpaio pardon, in other words, does have historical precedents (as Trump said on Monday) — just not good ones. 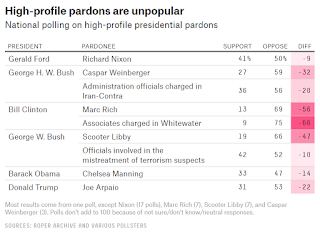 “A pardon is a judgment call that the president makes, and we get to police that through the political process,” [Michigan State University law professor Brian] Kalt said. Noah Feldman, a professor at Harvard Law School, said that the fact that Arpaio was convicted for deliberately ignoring a court’s order to stop violating individuals’ constitutional rights places him in a category of his own. The only recourse for such a dramatic abuse of presidential power, according to Feldman, is impeachment. Or, short of impeachment, Kalt pointed to Ford’s pardon of Nixon: “Ford decided it was the right thing to do, and he lost the election as a result.”