Via NPR, research suggests that we're all born with math abilities, which we can hone as we grown:


As an undergraduate at the University of Arizona, Kristy vanMarle knew she wanted to go to grad school for psychology, but wasn't sure what lab to join. Then, she saw a flyer: Did you know that babies can count?

"I thought, No way. Babies probably can't count, and they certainly don't count the way that we do," she says. But the seed was planted, and vanMarle started down her path of study.

What's been the focus of your most recent research?

Being literate with numbers and math is becoming increasingly important in modern society — perhaps even more important than literacy, which was the focus of a lot of educational initiatives for so many years.

We know now that numeracy at the end of high school is a really strong and important predictor of an individual's economic and occupational success. We also know from many, many different studies — including those conducted by my MU colleague, David Geary — that kids who start school behind their peers in math tend to stay behind. And the gap widens over the course of their schooling.

Our project is trying to get at what early predictors we can uncover that will tell us who might be at risk for being behind their peers when they enter kindergarten. We're taking what we know and going back a couple steps to see if we can identify kids at risk in the hopes of creating some interventions that can catch them up before school entry and put them on a much more positive path.

Your research points out that parents aren't engaging their kids in number-learning nearly enough at home. What should parents be doing?

There are any number of opportunities (no pun intended) to point out numbers to your toddler. When you hand them two crackers, you can place them on the table, count them ("one, two!" "two cookies!") as they watch. That simple interaction reinforces two of the most important rules of counting — one-to-one correspondence (labeling each item exactly once, maybe pointing as you do) and cardinality (in this case, repeating the last number to signify it stands for the total number in the set). Parents can also engage children by asking them to judge the ordinality of numbers: "I have two crackers and you have three! Who has more, you or me?"

Cooking is another common activity where children can get exposed to amounts and the relationships between amounts.

I think everyday situations present parents with lots of opportunities to help children learn the meanings of numbers and the relationships between the numbers. 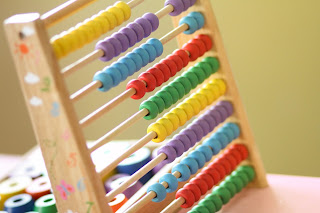