Cats Are A**holes (And Have Been for a While)

Via a Facebook group I belong to, Reviewer 2 Must Be Stopped - this article about the history of cats in academia:


A couple of years ago, Emir Filipović, from the University of Sarajevo, was trawling through the Dubrovnik State Archives when he stumbled upon a medieval Italian manuscript (dated 1445) marked with four very clear paw prints. 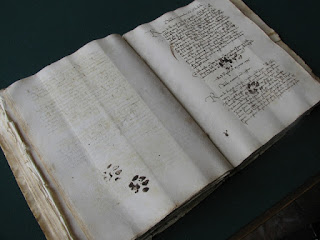 It could have been worse: around 1420, one scribe found a page of his hard work ruined by a cat that had urinated on his book. Leaving the rest of the page empty, and adding a picture of a cat (that looks more like a donkey), he wrote the following:

Here is nothing missing, but a cat urinated on this during a certain night. Cursed be the pesty cat that urinated over this book during the night in Deventer and because of it many other cats too. And beware well not to leave open books at night where cats can come.

For us humans though, the most interesting, and pressing, cat research investigates their propensity for spreading mind-controlling parasites. You see, cats carry a parasite called Toxoplasma gondii, which alters the behaviour of animals to make them less afraid of predators (and therefore more likely to be killed, eaten and used as a conduit for further propagation of the parasite).

The slightly eccentric Czech scientist Jaroslav Flegr has made such research his life’s work, and since a “light bulb” moment in the early 1990s he has been investigating the link.

We’ve known for years that infection is a danger during pregnancy and a major threat to people with weakened immunity, however the research of Flegrs and others suggests that infected humans are more likely to be involved in car crashes caused by dangerous driving and are more susceptible to schizophrenia and depression. And all that is to say nothing of the as-yet-unexplained link between cat bites and depression.

It's not all anti-cat. There's a great story about a cat who was named coauthor on a paper in physics, and as a result, got many invitations to speak at conferences and even an academic appointment.
by Sara at 9:25 AM