One of the key concepts behind statistics is the idea of "random" - random variables, random selection, random assignment (when we start getting into experimentation and the analyses that go along with that), even random effects. But as with likelihood, this is a term that gets thrown around a lot but not really discussed semantically.

Exacerbating the problem is that random is often used colloquially to mean something very different from its meaning in scientific and statistical applications. In layman's terms, we often use the word random to mean something was unexpected. Even I'm guilty of using the word "random" in this way - in fact, one of my favorite jokes to make is that something was "random, emphasis on the dom (dumb)."

But in statistics, we use random in very specific ways. When we refer to random variables, we mean something that is "free to vary." When we start talking about things like random selection, we usually mean that each case has an equal chance of being chosen, but even then, we mean that the selection process is free to vary. There is no set pattern, such as picking every third case. In either of these instances, the resulting random thing is not unexpected. We can quantify the probability of the different outcomes. But we're allowing things to vary as they will.

There are a variety of instances of random processes, what we something call stochastic processes.  You may recall a previous blog post about random walks and martingales. Things like white noise, and the behavior of the stock market are examples of stochastic processes, Even the simple act of flipping a coin multiple times is a sort of stochastic process. We can very easily quantify an outcome, or even a set of outcomes. But we allow each outcome to vary naturally.

Unsurprisingly, people often use computers to generate random numbers for them. Computers are great for generating large sets of random numbers. In fact, I often use R to generate random datasets for me, and can set constraints on what I want that dataset to look like. For instance, let's say I want to generate a random dataset with two groups, experimental and control, and I want to ensure they have different means but similar standard deviation. I did something much like this when I demonstrated the t-test: 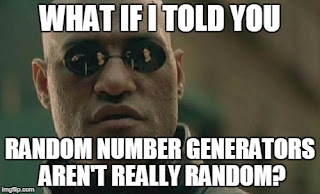 Now, let's copy that exact code and run it again, only this time, we'll change the names, so we generate all new datasets.

Everything is exactly the same. This is because I told it at the beginning to use the same seed as before, and by calling the set.seed command a second time, I also asked the program to go back to the beginning of that seed. As a result I can recreate my "randomly" generated dataset perfectly. But because I can recreate it every time, the numbers aren't actually free to vary, so they are not truly random.
by Sara at 8:30 AM