I have a confession: I'm a rat lover. I had a pet rat named Lily in college, and she was the best pet I'd ever had: personable, smart, absolutely adorable. Don't get me wrong, I wouldn't snuggle up to a sewer rat - Lily was as good as she was in part because she was the offspring of lab rats and also because she was highly socialized (exposed to people) from the very beginning of her life.


For the past two years, [Fordham University graduate student, Matthew] Combs and his colleagues have been trapping and sequencing the DNA of brown rats in Manhattan, producing the most comprehensive genetic portrait yet of the city’s most dominant rodent population.

As a whole, Manhattan’s rats are genetically most similar to those from Western Europe, especially Great Britain and France. They most likely came on ships in the mid-18th century, when New York was still a British colony.

When Combs looked closer, distinct rat subpopulations emerged. Manhattan has two genetically distinguishable groups of rats: the uptown rats and the downtown rats, separated by the geographic barrier that is midtown. It’s not that midtown is rat-free—such a notion is inconceivable—but the commercial district lacks the household trash (aka food) and backyards (aka shelter) that rats like. Since rats tend to move only a few blocks in their lifetimes, the uptown rats and downtown rats don’t mix much.

To collect this genetic information, Combs and colleagues trapped rats - using an enticing bait made from peanut butter, bacon, and oats - and collected tissue samples, mostly from the tail. He also collected information on rats' locations, by crowd-sourcing data: 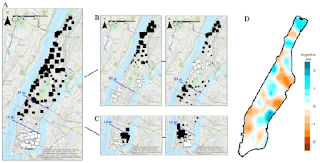 Fortunately, it sounds like Combs has come to appreciate rats as well:


After two years of trapping rats, Combs has come to respect the enemy. At the end of our conversation, he launched into an appreciation of rats—their ability to thrive on nearly anything, their prodigious reproduction, and their complex social structure, in which female rats will give birth all at the same time and raise their offspring in one nest. “They are, quote-unquote, vermin, and definitely pests we need to get rid of,” he says, “but they are extraordinary in their own ways.”