Weight management is one of the topics I study at my job, so it's unsurprisingly something I've blogged about before. Yesterday, the NY Times featured a story about The Biggest Loser, a reality TV weight-loss competition, and a scientific study performed using previous contestants on the show.

The study was done on 14 of the 16 contestants from Season 8 of the show, which aired about 6 years ago. Participants completed 3 days of testing at offices at the National Institutes of Health, where Kevin Hall, the principal investigator, works (at the National Institute of Diabetes and Digestive and Kidney Diseases, part of NIH). Additionally, researchers sent equipment beforehand to track participants' physical activity and weight prior to the visit (just in case participants tried to lose weight before testing began).

They found participants had drastically lower basal metabolic rates (BMR: the rate at which your body burns calories at rest). Over half of the participants now burn 400-800 fewer calories a day than the average person their size. For comparison, a pound equals 3500 calories. If these individuals used standard calculations to determine how many calories they could eat without gaining weight, they would gain between 0.8 and 1.6 pounds a week because of their slowed metabolism. Participants also had low levels of leptin, a hormone that controls hunger, which also explains weight gain; low leptin would make them feel hungry almost all the time.

Dr. Robert Huizenga, the physician for the show's contestants, sadly shows a complete lack of understanding that what contestants are being asked to do is unreasonable and unlikely to lead to long-term weight loss. In fact, his response to these findings, other than that he thought the measurements in the study were inaccurate was this:


But maintaining weight loss is difficult, he said, which is why he tells contestants that they should exercise at least nine hours a week and monitor their diets to keep the weight off.

“Unfortunately, many contestants are unable to find or afford adequate ongoing support with exercise doctors, psychologists, sleep specialists, and trainers — and that’s something we all need to work hard to change,” he said in an email.

That's right, 9 hours a week. Just for comparison, the recommendation from the American Heart Association is 40 minutes 3 to 4 times a week; that's less than 3 hours. And by the way, that number is actually for people at risk for heart disease, due to high blood pressure or cholesterol. If your BP and cholesterol are normal, you only need 2.5 hours a week of moderate exercise or 1 hour 15 minutes of vigorous exercise.

And don't even get me started on the fact that Dr. Huizenga thinks contestants need a team of weight management specialists after the show is over. Isn't the purpose of the show to demonstrate that regular people can lose weight and get healthy? Oh wait, it's reality TV, one of the most contrived, unrealistic situations you can find. Silly me.

Sure, Dr. Huizenga probably recommends this extreme amount of exercise because of the drastically reduced BMR. But it seems, for a medical professional, the better advice would be don't do The Biggest Loser. Just don't. 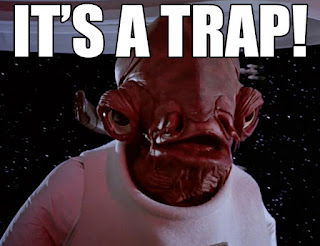 The problem with these shows and other fad diets, where people want to lose weight quickly, is that: the faster the weight is lost, the more drastic the changes needed to lose that weight. And drastic changes, which can include extreme calorie restriction or unreasonable amounts of exercise (or more likely, both) are 1) difficult to maintain long-term, and 2) trigger starvation mode, resulting in slower metabolism. What we didn't know is how long the body stays in starvation mode following extreme weight loss. This study tells us that, even 6 years later, BMR and leptin levels are significantly reduced.

Further, this study highlights the importance of weight maintenance - the things we do to keep the weight off. In so many cases, people participate in diet programs to lose the weight, and are essentially told, "Good job. Have a nice life." But it's not that easy. Ongoing support is needed. Not at the level Dr. Huizenga thinks, but keeping weight off can be just as challenging as losing the weight initially, perhaps even more challenging. There's still a lot we don't know, and more research is needed. But this study gives us some direction for the future of weight management research.
by Sara at 8:00 AM